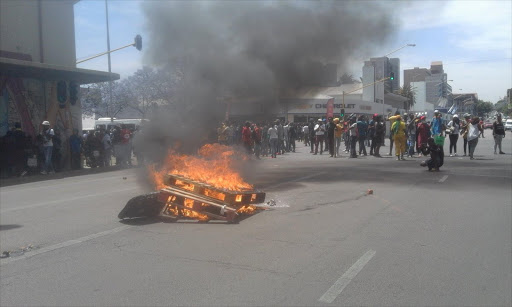 Business ground to a halt as shops‚ including banks and government offices‚ shut their doors and car alarms and the roar of armoured vehicles shattered the peace as police attempted to drive the protesters out of the city.

A large police contingent drove students off campus. The students then moved to the Hatfield arts campus where they also disrupted classes and barricaded the gate with burning tyres‚ rocks and other rubble.

Police in armoured vehicle were seen firing rubber bullets at a lone student with his face covered with a red cloth‚ carrying a stick and a rubbish bin lid. Construction men working near the North Gauteng High Court's Palace of Justice shouted at the student when he attempted to take cover among them.

The students regrouped later and marched to the Church Square‚ singing struggle songs and banging on road signs with sticks.

TUT‚ which has been on a two-week recess due to the violent protests, was supposed to resume academic activities on Monday but protesting students have vowed to ensure this doesn't happen.

Students calling others to come out to join them #Fees2017#TUTpic.twitter.com/bcNAUYN8DT

Few arrests have been made #Fees2017#TUTpic.twitter.com/2X4eKsf2yX

Vusi Mahlangu‚ student activist and Outsourcing Must Fall co-ordinator‚ said their programme started at the University of Pretoria on Monday‚ where the resumption of classes was disrupted and moved on to the Sefako Makgatho Health Sciences campus in Ga-rankuwa‚ North of Pretoria‚ on Tuesday where classes were also disrupted and police clashed with students.