WATCH: Inside the C-Max prison Ananias Mathe tried to break out of

The list of inmates at Kokstad's C-Max prison is terrifying; the roll-call utterly chilling. 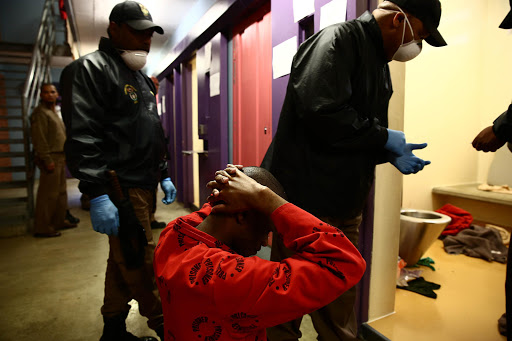 And they are just the tip of the iceberg. There are 1005 prisoners currently being housed in Kokstad. There are no communal cells, and offenders spend 23 hours a day locked behind solid metal doors – and when they do leave, their shackles are never removed.

Prisoners crouch with hands on heads during a search and seizure operation. Images: Thuli Dlamini

It's so hectic inside that, or so the legend goes, one inmate bawled as he begged a visiting deputy minister to have him moved to another facility.

Ebogweni Correctional Centre, to use its full name, is a facility designed specifically to break down “problem inmates” and get them back on the straight and narrow. As you would expect, security is tight.

Prisoners crouch with hands on heads during a search and seizure operation. Images: Thuli Dlamini

TimesLIVE was invited inside the prison this week during a massive search and seizure operation, which was triggered by the Mathe's second failed attempt to break out of the facility.

The broken window Ananias Mathe tried to use to escape.

Two sniffer dogs accompanied close to 50 officers from prisons in Durban, Pietermaritzburg and Kokstad as they made their way through five different sections of the prison.

Prison wardens and sniffer dogs search the cells for contraband.

They worked cell-by-cell. The inmate was strip searched, and every item of begging removed. Books were paged through and the dogs had their noses to the ground searching for drugs.

A prison warden searches a prisoner.

It is painstaking – the search took about three hours and not every section of C-Max was searched – but entirely necessary in a facility of this nature.

A prison warden searches one of the cells during the operation.

In the end, said correctional services spokesman Thulani Mdluli, nothing was found. But searches will happen again because, in C-Max, chances cannot be taken and there is no room for error.

Ananias Mathe back in a cell.