UCT staff round on ‘soft’ Price 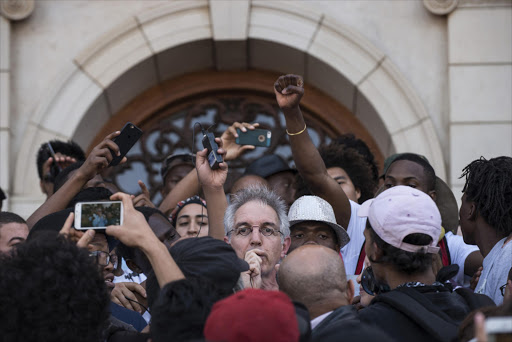 A pushover, sacrificing the University of Cape Town on the altar of negotiation with a group hellbent on destruction, or an iron-fisted dictator.

These are two of the perceptions of UCT vice chancellor Max Price that have emerged over the past few days as he faces fury from both sides: the university community and fees-must-fall zealots.

Student leaders said they were “unfazed” by Price’s “Draconian influence” and would “do whatever it takes” to stop the university from opening today.

But several academics said that Price’s decision to open the university after a month was “too little, too late”, and the vice-chancellor had “thrown them under the bus” by negotiating with people who have no intention of honouring agreements.

Academic Imraan Coovadia said that UCT “in its endless deference to fanatical groups” had turned its back “on its own faculty and community”.

A support-staff member, who did not want to be named, described Price as “a coward for not standing up to outrageous actions and demands” and said protestors were “stringing him along”.

“That he even still talks to them shows naivety .”

Another staff member was angry that “there has been no statement from management on the hate speech”, after “Kill all whites” was written on university notice boards.

A parent of a student criticised Price’s “softly softly” approach.

“His continuing engagements with the protesters will invite similar action next year,” the parent said, and added that “the domino effect” could lead to the complete closure of the institution.

She said: “The vicechancellor has thrown nobody under the bus” but had chosen to “engage with all stakeholders to resolve the issues.

“We will do everything we can to ensure the safety of UC T ,” she said.