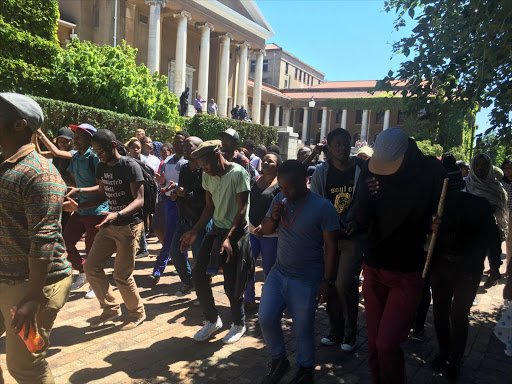 Students went from building to building in an attempt to disrupt academic activity at the University of Cape Town on 19 October 2016.
Image: Aron Hyman

While efforts continued to broker a “ceasefire” on campus‚ a group of students and workers attacked a security guard‚ threatened staff and ordered the evacuation of buildings at the University of Cape Town on Wednesday.

A group of about 100 students converged earlier in the day on the upper campus‚ watched by police and private security guards wearing helmets and carrying riot shields.

They were joined by about 40 workers from the university who vowed to shut down the institution‚ saying that although some had been insourced‚ their shifts had been reduced and they now earned R4‚000 a month. They were demanding longer working shifts and R12‚500 a month‚ plus additional medical aid benefits.

Taking the security guards by surprise‚ some of the workers broke away from a group of students and attacked a lone security guard. Video footage of the incident shows the guard lying on the ground‚ being beaten with a steel rod taped up with masking tape. He is also beaten with his own baton.

The guard was attacked because he bore a striking resemblance to a security guard who was photographed pulling the hair of a female student. The picture was published in a Cape Town newspaper on Wednesday morning.

Students went from building to building‚ trying to disrupt academic activity. A person from the Faculty of Humanities addressed them‚ saying‚ "Many of you are students in this faculty. I understand what you are doing. There is no need to fight‚ you can talk to us."

A student leader said that staff were antagonising the situation by being in their offices.

Protesters at one point chased two students from a lecture hall who were studying accounting.

A student leader told the Chemical Engineering Faculty staff that he “can't guarantee the safety of the people in the department". “For four weeks protests at UCT have been peaceful‚ there has not been burning yet."

Protesters‚ he warned‚ had the “capacity to deal with the security.”

He said the building must be evacuated or there won't be a conversation upon his return.

“It is not a threat‚ it's not a promise‚ it is a commitment‚" he said. UCT said in a note to staff and students on Wednesday that incidents on campus had been “deeply regrettable. We cannot solve the challenges we face through confrontation. We have to go back to talking and engaging with one another while at the same time making every effort to complete the academic year as successfully as we can.”

The executive had received a formal request to restart talks.

“To ensure that these discussions can take place in as peaceful an environment as possible and to de-escalate the tensions on campus‚ the Jammie Shuttle service will be suspended for the duration of these discussions today and the libraries will be temporarily closed while the engagement takes place.”

Students flung human waste on campus on Monday and clashed with security guards. Stun grenades were used to disperse protestors.