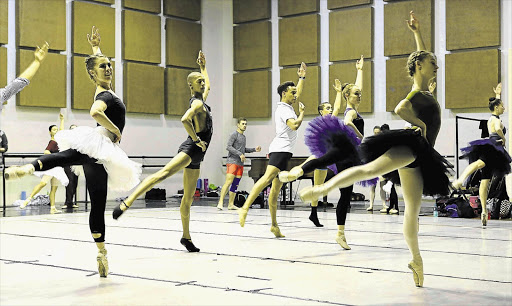 LOWERING THE BARRE: Cape Town City Ballet dancers rehearse at the Artscape Theatre after being told they were no longer welcome at the University of Cape Town.
Image: RUVAN BOSHOFF

After 82 years of partnership, Cape Town City Ballet has been booted out of its University of Cape Town premises because ballet is "Eurocentric and colonial".

Company members said they had to rush to clear their lockers and were warned it had become “unsafe” for them to be on UCT property owing to student protest action.

With three productions due to be staged in the next two months, the company is still looking for somewhere to rehearse.

It has been offered the temporary use of a small studio, with no changing rooms, at the back of Artscape.

The ballet company’s executive director, Elizabeth Triegaardt, no longer has an office and works at a table in the foyer of Artscape.

“Artscape is also under major pressure for space because they have their own productions starting, so we take whatever space we can get,” she said.

Every year for 82 years the company has signed a lease with UCT. It rented the premises and offered tuition to students.

The UCT School of Ballet became an important source of dancers for the company.

But last year, said Triegaardt, she was told that a group of students told the dean “that they didn’t feel it was appropriate for a classical ballet company to be on the premises because it’s Eurocentric and colonial”.

The lease expires at the end of the year but company members in mid-September were “warned not to go to UCT to rehearse”.

The company has had to suspend its development programme for young male dancers, which has led to several black male dancers flourishing before being scooped up by overseas companies as soon as they become semi-professional.

According to Triegaardt, the call to push the dancers out — almost half of whom are people of colour — was made by students in the contemporary and African dance streams.

Ironically, saids Triegaardt, it was she who insisted during her 22 years as head of the department on including contemporary and African dance as options for majors.

“I feel really sad that it has come to this — a tradition has been built up over eight decades and is now simply thrown out of the door”.

Pat Lucas, speaking on behalf of UCT, said the need for rehearsal space by UCT itself was the reason for the lease ending, and that “there is no factual basis” for the “allegation that UCT will no longer support ballet as an art form”.

She said discussions to cancel the lease began “before the most recent spate of protests” and that Cape Town City Ballet had provided a “nurturing environment in which our students could perform, and graduates could enter as dancers and choreographers”.

She said UCT “looked forward to seeing this relationship continue.”

Jane Fidler, who has been with the company for 22 years, said it was “traumatic” for her and the other dancers to leave a place that had been their “home” for so long and to “pack up their lockers so quickly” because “protesters weren’t allowing [us] in”.

Fellow dancer Ivan Boonzaier said: “It has been disappointing but there is nothing we can really do about it — because we can’t do anything about #FeesMustFall.”