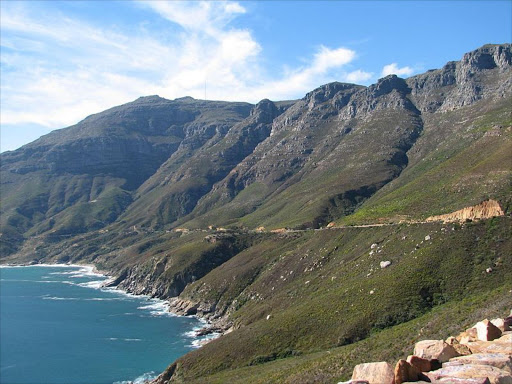 A motorist who drove off Chapman’s Peak Drive in Cape Town this morning has been safely rescued with the help of divers and a helicopter after at least five emergency services were called out to find him.

He has been identified as a 32-year-old man from Johannesburg who recently relocated to Cape Town for work. It is being speculated that the driver plunged off the steep cliff face after being pursued for trying to avoid paying the R42 toll on the scenic mountain route.

Craig Lambinon from the National Sea Rescue Institute said they were activated at 5.14am on Monday to assist the SA Police Services‚ Cape Town Fire and Rescue Services‚ Western Cape Government Health emergency services and Cape Medical Response after a vehicle had been witnessed plunging down Chapman’s Peak on the Hout Bay side of the peak.

Chapman’s Peak Drive was closed to traffic during the rescue operation.

Two NSRI rescue swimmers were deployed from a sea rescue craft onto the shoreline where they located the vehicle approximately 50 metres from the waters edge.

The driver was found by the NSRI rescue swimmers approximately a third of the way from the roadside. "It is believed that the man had been ejected from the vehicle as it rolled over terrain and down the mountainside‚" he said.

"It was confirmed that the 32-year-old man‚ believed to be from Johannesburg and now working in Cape Town‚ was the only occupant of the vehicle.

"The man was found to be conscious and in a stable condition but suffering head injuries and cuts and bruises."

"EMS rescue paramedics descended to the scene from the roadway using high-angle safety ropes and rigging and the man was treated by rescue paramedics for his injuries and in a stable condition he was secured into a specialised stretcher and he was hoisted to the roadway by the Skymed rescue helicopter and he has been transported to hospital by EMS ambulance in a stable condition."

Police have opened an investigation into the accident and to determine the cause of the accident.