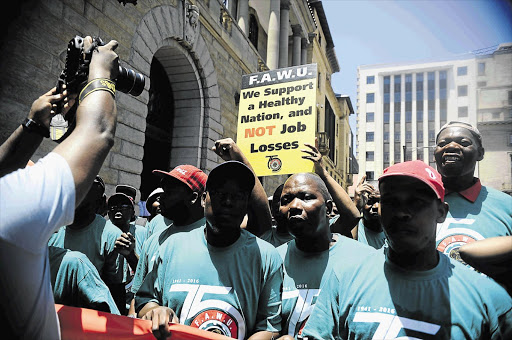 SCHWEET: Food and Allied Workers' Union members march to the offices of the Treasury in Pretoria in protest against the pending sugar tax. Fawu handed over a memorandum of its grievances to the Treasury and the Health Department calling for dialogue on health policies
Image: THULANI MBELE

The Food and Allied Workers' Union has declared war on the Treasury, demanding the scrapping of the proposal for a sugar tax.

Union members yesterday marched on the Treasury's offices in Pretoria demanding a stakeholder summit at which health policies would be discussed before the tax on sugared beverages becomes law.

At the urging of the Health Department, the Treasury is proposing a 20% tax on sugar-sweetened beverages such as carbonated drinks and iced tea. This has caused consternation in the beverages industry.

The government says the tax and other measures to combat non-communicable diseases, such as diabetes, are part of an "ambitious target of reducing obesity prevalence by 10% by 2020".

Fawu general secretary Katishi Masemola said the sugar tax was the kind of "neo-liberal" policy that angered the union.

Masemola said the Treasury's own research indicated that the tax could lead to 6,000 job losses in the beverages industry.

He said there was no guarantee that the tax would help solve the country's health problems but it was certain to add to already high unemployment.

Many other causes of obesity should be considered, he said, adding that "fatty chicken skins" - which the rich can avoid for health reasons - were dumped in supermarkets in poor areas and consumed by millions of poor people who could not afford healthier alternatives.

"Is the government going to introduce a fat tax as well? This is why we call for a summit on sugar and fat, health and jobs, in order to deal with causes of non-communicable diseases before rushing the unilateral implementation of a sugar tax," he said.

"This is a build-up to our biggest marches that will be held in major cities - Durban, Cape Town and Pretoria - prior to the finance minister's budget speech."

Treasury spokesman Yolisa Tyantsi denied that the Treasury had projected that 6000 jobs would be lost because of the tax, saying this figure was arrived at by researchers appointed by manufacturers of sugared beverages and was "a clear misrepresentation of the facts".

She said the "industry could sustain its volumes and revenues by reformulating and moving into untaxed [sugar-free] substitutes".

"The tax alone will not solve the problem of obesity but it will certainly make a contribution."