An investigative report has confirmed that teachers at the Pretoria High School for Girls violated the dignity of black pupils by instructing black school pupils to straighten their hair‚ ordered disciplinary action be taken against them and made racist comments. 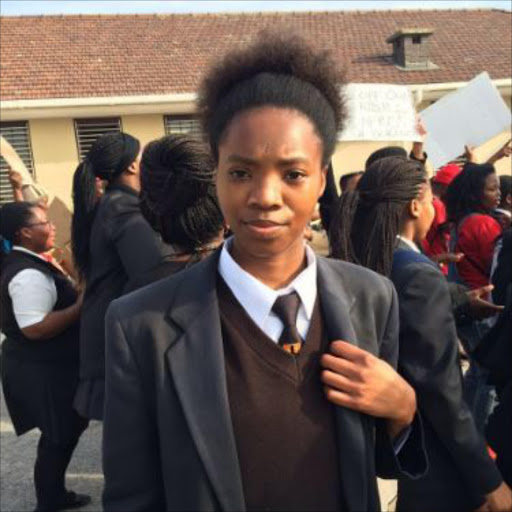 Unathi Gongxeka was told she will not write her exams if she does not change her Afro. File photo
Image: HeraldLIVE ‏@HeraldPE via Twitter

Gauteng education MEC Panyaza Lesufi on Friday revealed the findings and recommendations made in the report‚ which probed allegations of racism at the school.

In August pupils at the school protested against the instruction given to black students to straighten their hair.

Shortly after this‚ Lesufi visited the school to address the controversy when more than 4 500 people signed a petition calling for his intervention.

After listening to the pupils' complaints‚ the MEC resolved that the section school's code of conduct pertaining to hair be reviewed and called for the probe.

The report‚ which was given to Lesufi in October‚ said many of the allegations made by the students are true.

The pupils also complained that there were rules against using their mother tongues in private conversations. This could not be substantiated apart from one incident between a teacher and pupils.

The report recommends disciplinary action be taken against teachers where there is sufficient evidence of wrongdoing.

The report also said the practice of asking black pupils to "sort out their hair" must cease.

It also found that the school had not done enough to address pupils’ complaints when they were first raised. Lesufi apologised to the pupils for having suffered experiences of victimisation and said he hopes that schools countrywide learn from the report's findings.

“We now have a responsibility to transform Pretoria High School for Girls and any other schools in Gauteng that face challenges similar to or worse than those faced at this school.

The report has been sent to Minister of Basic Education Angie Motshekga.

“We want to be corrective rather than punitive‚” Lesufi said of the report's recommendations‚ which include diversity training and a culture survey to independently establish pupils’ attitudes and experiences.