Secret tape recordings‚ a racial slur and a strained relationship between a father and son emerged in the Port Elizabeth High Court‚ as the final week of the Panayiotou murder trial wrapped up for the year. 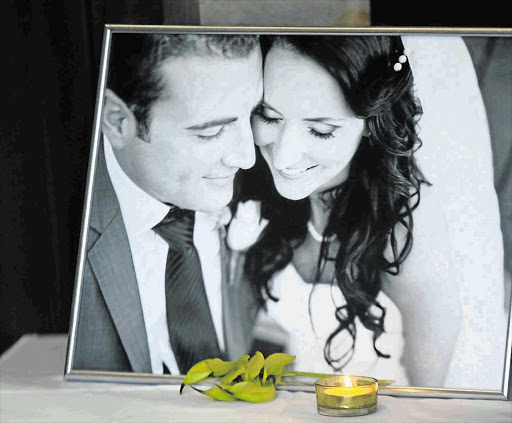 A picture of Christopher and Jayde Panayiotou displayed at her funeral
Image: Sunday Times

Setting out his case on the first day‚ prosecutor Marius Stander said alleged trigger man Sizwezakhe Vumazonke was approached to kidnap and kill Jayde after negotiations with a man known only as “Happy Trigger” failed.

Stander also set out to prove that Christopher Panayiotou bought a second SIM card‚ used only to contact his mistress‚ Chanelle Coutts‚ and “middleman” Luthando Siyoni.

After Jayde’s murder‚ the SIM card was discarded.

Details of Jayde’s kidnapping and murder were revealed for the first time. A blunt-force injury to the back of her head was consistent with her being pistol-whipped before being shoved into the boot of a rental car.

Then‚ in KwaNobuhle‚ a bullet to Jayde’s back paralysed her before her killer stood over her and fired the fatal shot. She put out her hand in an attempt to shield herself.

Resident Rachel Windvogel said she heard three gunshots before 7am on April 21.

Colleague Cherise Swanepoel was the last to communicate with the Uitenhage teacher.

Jayde confided in Cherise and sister Toni Inggs about her loneliness. She also suffered from depression.

Clarishka Kapp said when Jayde was away‚ Coutts slept over at the couple’s Kabega Park home and he spoilt her with expensive gifts.

While Nemembe and Sibeko did not give plea explanations‚ Panayiotou said he loved his wife and that they were happy.

Panayiotou also accused the police of using unlawful tactics to build a case.

Zoleka Zekani said Vumazonke asked her to “wash” him‚ but she refused‚ based on what he told her.

Because Vumazonke has since died‚ much of what he told the sangoma was ruled hearsay.

The Inggs family cried when a photograph of Jayde’s body was shown to court.

Estelle Burger‚ of Nedbank‚ said Panayiotou phoned her the day of Jayde’s disappearance‚ asking her to track movement on Jayde’s account.

While she claimed she refused because Panayiotou did not have signing power‚ Advocate Terry Price said she was being untruthful because she was scared of getting into trouble with the bank.

The Infinity Cocktail Bar alarm was deactivated at 11.25pm on April 21‚ when the state claims Panayiotou fetched money to pay Siyoni.

Ndedwa claimed Panayiotou then paid him to destroy the phone. He also claimed his boss at the time told him to give R30‚000 (alleged hit money) to Siyoni.

While the police claimed Vumazonke sustained a swollen eye during arrest when he hit his head on a car door‚ Price accused them of assault.

Expert witness Lorenz Stoger explained how a tracker fitted to the Toyota Etios allegedly used to kidnap Jayde circled her Stellen Glen complex – going no faster than 25km/h – before suddenly stopping‚ then speeding off again. Later‚ the vehicle stopped where she was shot dead.

Siyoni’s girlfriend‚ Babalwa Breakfast‚ was arrested for perjury when she backtracked on her police statements to deny the R31‚000 found in Siyoni’s gym bag was payment for the hit.

Her testimony in court was also countered by Constable Yandiswa Kumla‚ who said he wrote down exactly what Breakfast told him.

The defence said Breakfast was considered legally blind and could not have read her own statement the way police claimed.

Brigadier Gary McLaren said he arranged for Siyoni’s confession to be recorded in Fort Beaufort as he wanted to hide it from the media.

Warrant Officer Phillip Bekker said Blue Star sprayed in the boot of the rental vehicle reacted positively to what he believed was blood.

Jayde’s father‚ Derick‚ became emotional as he told how he had been friends with his son-in-law. Price sympathised with him for his loss.

A number linked to the Facebook account of Nemembe was one of the ways in which police tied him to the alleged offence.

The defence fumed when Stander went against an earlier decision to abide by a trial-within-a-trial to determine the admissibility of Siyoni’s evidence and instead argued against the process.

Siyoni‚ who turned a Section 204 witness when he claimed Panayiotou approached him to arrange hitmen‚ recanted on his statement and said he knew nothing of the hit.

Siyoni changed his tune more than once‚ ultimately being declared a hostile witness.

While he continued to deny his involvement‚ he now claimed he became aware of the hit when Vumazonke told him afterwards.

He said Panayiotou gave him R80 ‚00 to pay Vumazonke.

Stander put cellphone evidence to Siyoni‚ where he inquired about a rental vehicle at the request of Vumazonke‚ and then asked Panayiotou for money.

Stander then showed him proof of an SMS sent to a contact on his phone by the name of “Happy Trigger” in which he described Jayde’s car.

Siyoni said police assaulted him‚ forcing him to implicate Panayiotou in the murder.

They then forced him to send text messages and to phone Panayiotou to get him to implicate himself.

Past cases in which the arresting officer‚ Lieutenant-Colonel Willie Mayi‚ was criticised came back to haunt him as he was forced to answer to allegations of assaults and threats to key witnesses.

Mayi said he received a call from an informant implicating Siyoni in Jayde’s murder.

He questioned Siyoni and Breakfast‚ whom he claimed quickly spilt the beans.

But Price said Mayi was the “enforcer” and that Siyoni was beaten and forced to implicate Panayiotou.

Siyoni had testified that police showed him graphic images of Jayde’s body – something Eksteen denied.

But in a recording played by Price‚ Eksteen was heard telling the Panayiotous about this.

The same recordings revealed a rift between Panayiotou and his father‚ Costa‚ who did not approve of his affair.

The trial resumes in April.