Think matric is hard? Try it blind or partially sighted 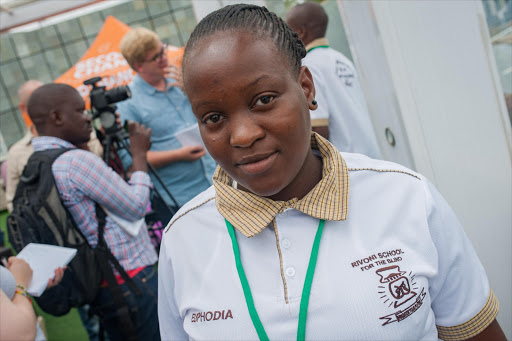 Euphodia Mudau from Rivoni School for the Blind at the matric results announcement at Vodaworld in Midrand.
Image: Daylin Paul

Trying to read a textbook was the hardest part of matric for Euphodia Mudau‚ a partially sighted pupil from Rivoni School for the Blind in Limpopo and a top achiever in the country.

The top pupils from special needs schools‚ the poorest schools and the wealthiest state schools met the Minister of Basic Education Angie Motshekga this morning.

Glasses don't help Mudau's poor eyesight so she has to hold a book very close to her face and gets headaches from reading.

"Studying was painful‚ so it was difficult for me to study. Sometimes I [ would] call someone to read for me [but] sometimes they would refuse."

Her favourite part of matric was that it was difficult. "I like challenges."

She also said her school had had a shortage of textbooks.

She will be pursuing a degree in media studies. Her first choice was a business degree‚ but she was not acceptedas she did maths literacy rather than mathematics.

Her classmate‚ Hlulani Malungani‚ who cannot see at all‚ is also a top achiever. He said he struggled when his audio machine‚ which reads books for him‚ broke twice during the year‚ just before his trial exams and during his final business studies matric exam. Someone helped read him the exam questions.

He said he also got sick in winter‚ feeling aches and pains in his muscles and doctors didn't know what was wrong.

"They didn't believe me he‚" he said angrily. "They didn't understand what was happening‚ That was the most confusing part. They said I am only having this problem in my mind."

His pains were never diagnosed.

As if that wasn't enough of a challenge‚ one of the books he used to prepare for the exams was stolen from him in June.

Another top achiever from the same school‚ Zacharia Nyathi‚ a partially sighted student‚ said reading was really hard for him. He didn't use braille however.