Had Angie Motshekga been the owner of the White Star shipping line on the morning of April 15, 1912, history might have sounded quite different. 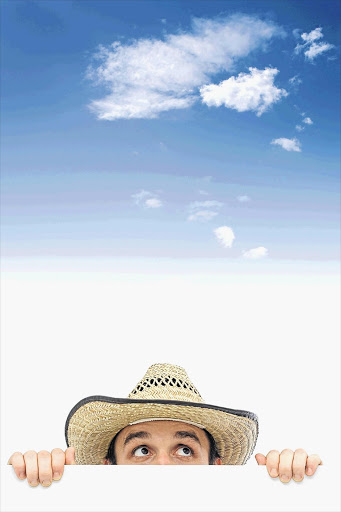 HANG IN THERE: Bear in mind that pessimism is not insight but narcotic fog
Image: GETTY IMAGES/ISTOCKPHOTO

As flashbulbs popped and journalists shouted questions, she and her team would have shuffled into place behind a table. An appeal for quiet; and then the big news, delivered with half a smile: White Star Lines was delighted to announce that early this morning the RMS Titanic had become the world's first passenger submarine.

She was still verifying the figures, but it looked like almost a third of the passengers had survived, and she wished to extend warm congratulations to them and their families.

I like to imagine that a sensible public would have howled her down and run her out of town, but after last week I'm not so sure.

Instead of uniting to mourn the countless young lives trapped in a sinking system and dragged down into the deep, many South Africans instead argued over the matric results as if there was something to argue about; as if we're still unsure about whether this is working or not; as if our schooling system might still turn out to be a submarine rather than a wreck.

Perhaps the confusion is understandable. Assumptions, both sensible and false, are wobbling. What once felt like bedrock now shifts like jelly under our feet. It is increasingly difficult to know what to think, indeed, to share ideas at all. Who, these days, would risk the wrath of one of the many inquisitions doing the rounds, or has the energy to take on the legions of know-nothings?

All of which is why I'm going to stick to a few simple guidelines in the year ahead; not so much resolutions as gentle reminders to myself: Post-It notes stuck on the fridge of my subconscious.

The first is to keep remembering that this year our politicians are going to say a lot of words, because that's how politicians make money. When they say those words I'm going to want to believe that they have some connection with reality and I'm going to want to catch feelings. But that's what the politicians' financial planners want me to do: every time we take the bait and get worked up, we send up dust and smoke and noise, a great smokescreen that allows the looters to steal a few million more. So in 2017 I'm going to try to count to 10 and opt out of actively making the conmen richer.

I will also look up the definition of "gaslighting" just to remind myself of what it looks like, and who does it, and why. Because this year, as senior gang bosses shift allegiances to get a better grip on the teat, they're going to tell me that I'm mistaken for thinking poorly of them. They will clutch the constitution or the Bible or portraits of Oliver Tambo and insist that they never voted to entrench corruption and that if I still believe them to be scoundrels then the problem must lie with me. Yes, "gaslighting" is definitely one to remember in 2017.

(Note to self: remember to keep some salt aside to sprinkle over think-pieces about how the deputy president is going to grab the controls and pull us out of our current dive. Having watched Cyril the Human Ball-Gag smile and nod his way through the calculated dismantling of accountability and good governance in this country, I will emulate him by simply smiling and nodding.)

The next Post-It is just a number: 8.5. That's the percentage of my compatriots who voted for the EFF. Which is why, when I read tumescent prose about how the EFF is a giant, red tsunami, I will remind myself that there are more left-handers in South Africa than Fighters.

Likewise, when the Commander-In-Chief denounces Jacob Zuma, I will recall how he made his career by giving us Zuma, and how he now furthers that career by attacking Zuma. (And yes, in fairness, I expect the president also features heavily in the prayers of Padre Maimane: "For what we are about to be handed on a silver platter in the next few months, may the Lord make us truly thankful...")

Finally, I will try to remember that opinion is not news. Twitter is not a peer-reviewed journal, and shouting, "This is the worst year EVER!" reveals only that one knows very little about history. Most of all, pessimism is not insight. Rather, it is a narcotic fog we breathe, vented by millions of people seduced by misery; people who have watched footage of a distant massacre before they've got out of bed or read angry words on a screen before they've spoken to another human being. They are not informed: they are infected.