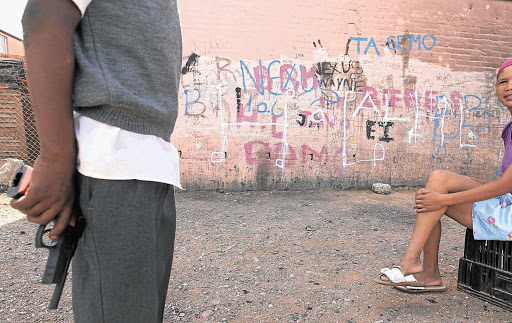 NOT CHILD'S PLAY: Rival gangs are all out to make their mark on the violence-riddled Cape Flats. The gun is a toy, but the killings are real
Image: ESA ALEXANDER

All the techniques had benefits‚ but the “neurogenic tremors” — advocated by US doctor David Berceli and depicted in numerous YouTube videos — “yielded a significant reduction in teacher stress”.

The so-called trauma release exercises induce tremors. The physiological changes are said to have a psychological knock-on.

The other stress-relief techniques in the study‚ taught in group sessions for a total of 15 hours over 10 weeks‚ focused on stimulating the limbic system in the brain with song‚ dance and massage “to bring about heart coherence and calmness”; and a more traditional cognitive and behavioural approach that involved group discussions and role-playing.

Writing in the South African Journal of Psychology‚ Johnson and Naidoo said: “All interventions were designed to deal primarily with issues of learner discipline‚ the greatest reported stressor of teachers in the study’s high-risk schools.

“The trauma release exercises allowed teachers to release tension in their bodies and perceived stress levels to be reduced. They were better able to handle learners in a more prosocial classroom.”