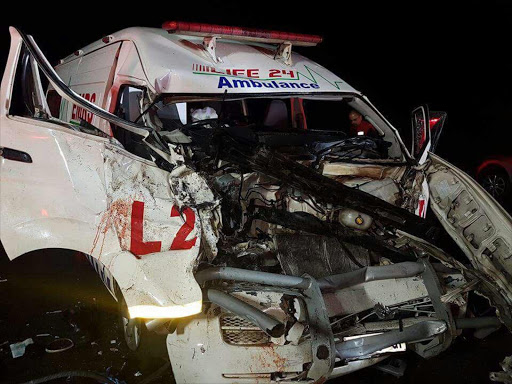 An ambulance driver is in a critical condition after crashing into a hippopotamus crossing the road in Pretoria.

Life 24 ambulance service was transporting a patient to Milpark hospital in Johannesburg on Monday night when the hippo crossed the road. The driver and two of his colleagues were travelling back from Limpopo.

“This is the first time that I have heard of hippos in the area in all my 17 years working that route‚” said Charl Blake‚ owner of Life 24 Ambulance service.

Blake said that the accident occurred at about 10pm as the three men were exiting Pretoria.

“There are no signs along the route warning motorists of hippos there‚ this hippo comes as a big surprise to us”.

Two of the ambulance crew were discharged from hospital earlier on Tuesday morning.

Their colleague is still receiving treatment in high care.

Most of the damage to the ambulance was on the driver’s side‚ said Blake.

The hippo was killed in the collision.