An elderly Underberg farmer who was bound and beaten over two days by a gang of farm attackers is fighting for his life in a Pietermaritzburg Hospital. 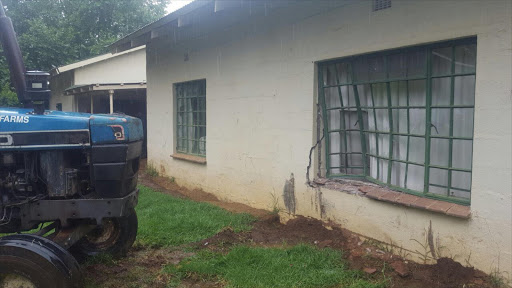 An elderly Underberg farmer who was bound and beaten over two days by a gang of farm attackers is fighting for his life in a Pietermaritzburg Hospital.
Image: Supplied

The bloodied body of 79-year-old Trevor Rees was discovered by employees on his farm Pudsey‚ on the outskirts of the southern Drakensburg village early on Monday.

The attackers are believed to have stormed his home on Friday night‚ kicking down a door after first using a tractor to ram a hole in his bedroom wall.

Rees‚ a timber farmer who lived alone‚ was subdued‚ beaten and left on his bedroom floor‚ only to have his attackers return a day later and viciously assault him again.

The attack on Rees is the second violent farm robbery in the area in less than a week.

Last week farmer Gavin Carter was gunned down in his home by three men in an apparent robbery on his farm West Ilsley.

Berg Protection’s Brett Deavin said that paramedics had rushed to Rees’ home on Monday morning after one of his workers had raised the alarm.

“We found him still bound on the floor with blood everywhere. It looks like these guys first tried to ram down the wall with a tractor. When that failed they kicked in a door and managed to get a hold of him‚” he said.

“They beat him badly and tied his arms behind his back with electrical wire. They managed to get into his safe and took some money and other valuables before leaving‚” Deavin added.

He said that Rees had told medics that his attackers returned a day later.

“They came and beat him again and cleared out more of his things. When we found him he was in a critical condition. He is a tough old b**tard who had hung on‚” he said.

The robbers escaped with Rees’ bakkie and variety of valuables.

Police spokesperson Colonel Thembeka Mbhele said that detectives were investigating both incidents and that no arrests had been made.

“These are occurrences that the country just cannot afford. We call on the state to take drastic action to curb and prevent farm attacks‚” he said.

“This is the second incident in Underberg in a matter of days and we request that the police up their patrols in the area‚” he added.