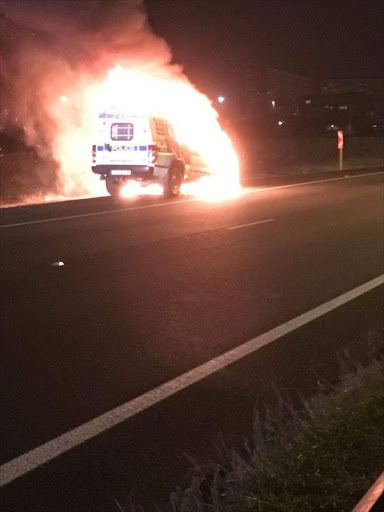 A Port Elizabeth police K9 unit Ford bakkie burst into flames on the N2 near the Uitenhage turnoff.
Image: Piet Modise via Twitter

A Port Elizabeth police K9 unit Ford bakkie burst into flames on the N2 near the Uitenhage turnoff at the weekend.

The fire happened only hours after the Eastern Cape was hailed as the National K9 Championship’s overall winners at a gala dinner held at the Boardwalk.

The celebrations were short-lived as news broke of one of their police bakkies going up in flames at about 11.30pm on Friday.

The unit now has only one K9 unit response vehicle – which is equipped with K9 transport cages – to respond to priority crimes such as robberies and hijackings across Port Elizabeth.

The fire‚ described by officials as a freak accident‚ gutted the unit’s Ford bakkie – which had more than 300 000km on the clock.

Police spokeswoman Colonel Priscilla Naidu said none of the police officers and their dogs who were in the bakkie at the time were injured in the blaze.

Sergeant Thembile Happyboy Gaba and his Rottweiler‚ Mufasa‚ and Constable Zane Matill with his Malinois‚ Zest‚ were lucky to escape unscathed.

Mufasa is a patrol dog while Zest is a specialist narcotics detection dog.

Naidu said the bakkie burst into flames while the officers were nearing the Uitenhage Road offramp on the N2.

“They were on the N2 doing standard patrols when one of the officials noticed smoke coming from the engine compartment‚” she said.

“The vehicle was pulled off the road and before they could do anything‚ it burst into flames.

“The two members managed to open the transport kennels and get both dogs out before the fire spread.”

“At this stage‚ the cause remains unknown and our mechanics as well as experts from Ford SA will assist with determining the reason for this happening.”

While the K9 unit has been plagued with vehicle shortages for years‚ this incident has rendered specialist units almost out of action.

However‚ despite the constant vehicle shortages plaguing the unit‚ they won several awards at the awards gala.

Asked what was going to be done about the vehicle shortage‚ Naidu said contingency plans had been implemented.

“Vehicles are being borrowed from other units and police stations within the units to assist in the short term‚” she said.