Formerly conjoined twins will get to go home soon

Formerly conjoined twins Uwenzile and Uyihlelile Sihlongonyane are headed home in the next couple of days following a successful separation operation at Netcare Unitas hospital in Centurion. 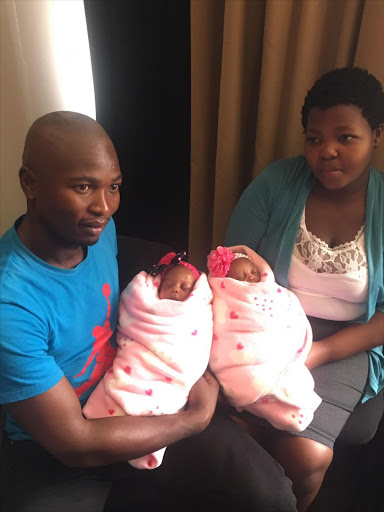 Dressed prettily in pink‚ the twins slept peacefully in their parents' arms on Tuesday as they were discharged from the hospital.

The twin girls who are from Big Bend in Swaziland were separated on January 21.

The pair‚ born on January 2‚ to 19-year-old Bongekile Simelane and her husband Mbongeni Sihlongonyane‚ together weighed 4.21 kilograms at birth and were born joined at the abdomen.

The procedure was a first for the hospital but was the second set of twins separated by paediatric surgeons Dr Mariza de Villiers and Dr Paul Stevens‚ with an all-female team of anaesthetists.

"This type of conjoined twins are known as omphalopagus twins‚ which means they were joined at the lower abdomen and do not share a heart‚” they noted.

The twins were officially separated at midday‚ with the procedure completed in its entirety by 2pm.

The babies have already been discharged but will be kept for another two days in the hospital while final travel preparations are made for their commute back to Swaziland on Thursday morning said Robert Jordaan‚ hospital manager at Netcare Unitas Hospital.

"The procedure itself was relatively simple but the finer details were a problem. There were 11 theatre sisters‚ 4 members on the surgical team and 4 anaesthetists involved‚" said Dr de Villiers.

"We were fortunate in this case because the twins did not share any significant organs. You always get surprised with every surgery but this time we were pleasantly surprised. It was just muscle‚ skin and bones that was shared by the twins"‚ explained Dr. Stevens.

"We expect them to be perfectly normal and to live a healthy life‚" said Dr. Marleen Engelbrecht‚ one of the doctors on the surgical team.

"We did have a problem with the hearts that we noted‚" she further explained‚ "But there is a 75-80% chance that the holes in the heart will close up but we will monitor that."

Portia Mabuela‚ a nurse at Unitas‚ who has become a close friend of the parents said "those twins are really close to my heart‚ and mummy you are like my younger sister and I'm really happy".

The soft-spoken‚ shy mother smiled quietly as media pored over the twins.

"I was scared that I would lose one of them and asking myself a lot of questions but Portia was there and told me that they would both be fine‚" said Simelane.

"I'm sure they'll be happy at home.. I'm happier than anyone here‚" said Sihlongonyane with a proud smile.

"I didn't believe it when they first told me that the twins were conjoined.

"The Swaziland government was very helpful in getting us here and when we arrived‚ they gave me hope that the twins would live‚" he added.