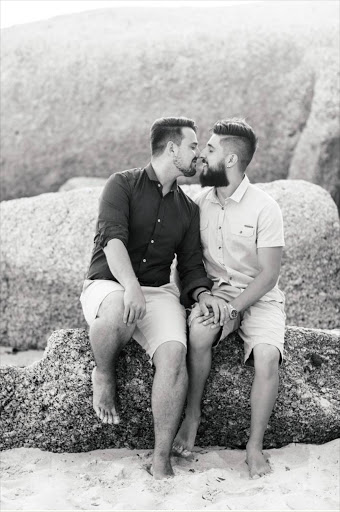 This Brazilian same-sex couple were verbally abused during a romantic photo shoot on the beach.
Image: Wesley Vorster

Gay Capetonians took a Brazilian same-sex couple‚ who were verbally abused during a romantic photo shoot on the beach last weekend‚ out on the town last night.

“We wanted them to know that was a horrible once-off event‚” said the photographer‚ Wesley Vorster.

Vorster‚ a wedding photographer‚ witnessed the homophobic attack on Platão and Rafael Terra while taking pictures of them at Glen Beach.

“I haven’t seen homophobia and aggression like this before and I have done shoots all over and in central Joburg‚” he said.

The two men have been married for three years and a couple for 11 years.

While Vorster was taking photos of them at Glen Beach‚ a man‚ who was there with two boys‚ came up to them and shouted insults at them.

On their Facebook page they wrote in Portuguese (translated into English by Facebook): “We suffered a homophobic attack for (being free) in public. A man used the trivial arguments like ‘homosexuality is not natural’ and ‘my children can't see a thing like that’."

They said it was scary at the time but the local gay community had been kind to them.

“We've made friends here who have been keeping an eye on us and received love and words of support (from people) dismayed by the situation. “

Despite the hostility of the prejudiced stranger‚ they described Cape Town as a “beautiful place with fantastic people”.

“We can't judge an entire population by one case only‚” they wrote.

The couple chose to come to the mother city because gay marriage is legal in South Africa and they wanted to visit the continent.