Bela Bela mayor ‘in hiding’ after protesters torch his car 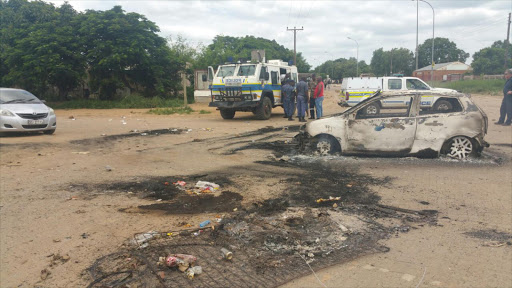 The Bela Bela community took exception to the decision to raise electricity rates to R500 as well as a KPMG report into corruption in the municipality which has not seen the light of day‚ despite being completed months ago.
Image: SAPS

Protests over electricity price hikes in Bela Bela‚ in Limpopo‚ continued into the night after the torching of the mayor's car on Tuesday afternoon.

Mayor Jeremiah Ngobeni's white VW Polo was burned and foreign-owned spaza shops were looted throughout the night‚ according to a local municipal councillor.

The Democratic Alliance’s Thinus Ras said the community took exception to the decision to raise electricity rates to R500 as well as a KPMG report into corruption in the municipality which has not seen the light of day‚ despite being completed months ago.

“The community is very upset. There is quite a lot of chaos‚” Ras said on Wednesday. “The mayor is currently in hiding.”

Ras said he had received reports that live ammunition were fired on Tuesday night as community members looted some foreign-owned spaza shops in the area.

“I don't know exactly what happened‚ but live ammunition was shot at the guys who turned against the community and informed the police where the looters were‚” he said.

Limpopo police spokesperson Brigadier Motlafela Mojapelo said the situation was “relatively calm” at the moment and that the police had not received any reports of shops being looted.

“We also heard those reports‚ but they were not reported to us. We are treating it as speculation since they haven't come to open any cases‚” he said.

Mojapelo said he would follow up on reports of spaza shops being looted as well as the use of live ammunition.