The men of the law who patrol the streets of Rosettenville‚ south of Johannesburg‚ are said to be some of the biggest customers of a local brothel. 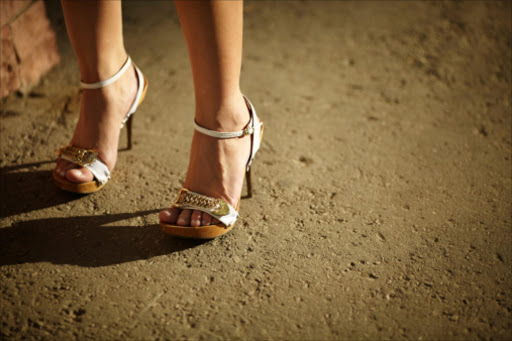 This is according to a group of sex workers who operate from one of three houses which were attacked by community members at the weekend.

“They are the biggest clients to us‚ but when the people make riots here‚ they make it seem like we are the most disgusting people around‚” says Nikki*‚ a prostitute with years of experience in the sex trade.

“Sometimes the one [police officer] will leave the other one‚ drop him with a van. The one will drive the van up and down until this one is finished inside the house and then they will come and pick him up with the van again. This is while they are on duty‚” Nikki tells us‚ biting on a slice of toast and sipping on a cold drink.

Busi* also has a room in the same house.

She‚ too‚ says police are some of her biggest clients and they are sometimes willing to pay extra for her services.

“There are many police officers that I communicate with on my phone. Some are even asking me out‚” Busi says.

“Some even say‚ ‘If a client is giving problems‚ just call me’. They will come and solve the matter for me.”

According to Busi‚ the police officers have praised her for being able to fend for herself from the money she makes through prostitution.

“Police say they love the prostitutes because they will never ask for money for rent or hair‚” Busi says‚ explaining that she is able to change her hairstyle numerous times a month and pay her rent on time.

Busi and Nikki are livid after community members marched to their house on Sunday‚ and tossed their belongings outside before torching them.

Beds‚ bedding‚ plasma TV sets‚ music systems‚ clothes and money were some of the things that the girls lost in the uproar.

Locals had decided to take a stand against what they say are drug dens and brothels run by Nigerian nationals.

The Nigerian nationals are producing documents which purport to show they are the rightful owners of the houses.

“The community has decided to say that enough is enough‚ we have been accommodating‚ especially to Nigerian nationals‚” says Hlafa.

He says that while not all Nigerians living in the area were involved in crime‚ most of them were.

“Some are pastors by day and criminals by night‚” he added.

In a bid to reclaim and clean up the area‚ they marched to some of the hotspots which have been identified.

Nikki and Busi say they were powerless when the locals pounced‚ and believe they are victims of the Rosettenville community.

They are scathing of the police for failing to protect them from the crowds‚ even though no drugs or other illegal substances were found in their house.

“Is there anything that says that prostitutes are illegal because prostitutes started in the Bible already‚” says Nikki‚ with a rosary dangling from her neck.

The girls claim to be legal tenants in the yard‚ each paying R2000 for a room to a Nigerian caretaker.

The girls say the owner of the house is actually a South African national who travels to Lesotho quite often. He cannot collect the rent money himself.

“[The community] thought that this house was hijacked‚ just like other houses [which they destroyed] but it’s not‚” the girls say.

When TimesLIVE visited the property on Tuesday morning‚ at least five girls were present in the yard. Some of them occupy rooms in the house‚ while others are accommodated in rooms built behind the property.

TimesLIVE visited another house just up the road from where Nikki and Busi operate.

Nigerian nationals who were sitting close to the house soon left when we arrived.

Several minutes later‚ a young girl‚ who appeared to be in her teens‚ emerged from the house and stood at the locked security gate. The house was without a door.

TimesLIVE attempted to speak to her but she was not willing to say much. “I am happy about what happened‚” she says sarcastically‚ before heading to the back of the house. A man’s voice was heard inside.

It was completely quiet outside the third house.

Community members had on Sunday broken down a portion of the wall surrounding the house.

But on Tuesday‚ the wall had been re-erected.

Remains of burnt beds and other debris was strewn all over the property. Several pairs of high heels were seen around the yard.

Community Police Forum leader Godfery Mtobongwana says that when they arrived here on Sunday‚ they found a naked lady on the property.

She was ordered to get dressed and leave.

Johannesburg mayor Herman Mashaba later visited the area and vowed to address the concerns of the community.

In the meantime though‚ it is back to business for the prostitutes of Rosettenville.

“I borrowed this blanket from some guy since they burnt everything‚” Nikki says‚ inviting us to see her room.

A cross dangles from the curtain rod in her dark room. A smaller one is mounted by her door.

Busi says the community’s effort to stop her business motivated them to work even harder.

“They have made us more serious‚ to be even worse than before‚” said Busi.

TimesLIVE visited the local police station to question the police on the prostitutes’ allegations.

All questions were referred to provincial spokesperson Lieutenant-Colonel Lungelo Dlamini.

*Not their real names.