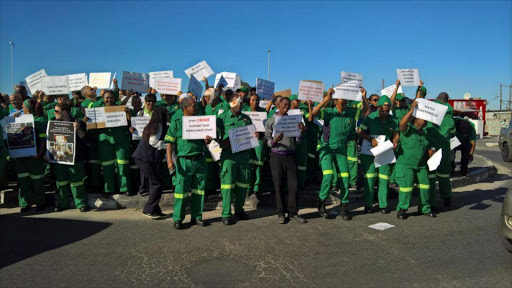 A group of paramedics is marching in Philippi demanding an end to attacks on ambulance workers in townships. File photo
Image: Facebook/SABC news

A trade union representing health workers in the public and private sectors is struggling to understand why communities are attacking ambulance workers trying to save lives.

Commenting on an attack on an ambulance in Pietermaritzburg over the weekend‚ the union said attacks are increasing in KwaZulu-Natal‚ the Western Cape‚ Gauteng and Free State.

The Health and Other Service Personnel Trade Union of South Africa (Hospersa) said that an ambulance responding to a call from Slangspruit‚ just outside Pietermaritzburg‚ KZN‚ was attacked by four men and a woman.

"Two paramedics‚ one male and one female‚ were in the ambulance during the attack‚ which resulted in the ambulance doors being damaged and the windscreen being smashed." The attack took place on Saturday night at around 10pm.

"It is unacceptable that Emergency Medical Services members must operate in these conditions‚" said Hospersa General Secretary Noel Desfontaines.

"The fact that members of communities prey on those who serve them‚ is deplorable‚" he said.

Hospersa says amongst options discussed with various roleplayers to protect medical staff are police escorts for ambulances‚ violent incident training for EMS workers‚ as well as proposals to start issuing ambulances with firearms.

"While the South African Police Services (SAPS) has started escorting some ambulances on calls to so-called red zones in the Cape Town area‚ the logistics and timing involved proved to be problematic up to this stage."

Hospersa has also called for the Health Ministry to consider requesting the deployment of the South African National Defence Force (SANDF) to assist with these challenges.

“We want to see government doing more to protect EMS members‚” said Desfontaines. “The response to this problem is too slow and many of our good proposals seem to be falling on deaf ears. We are busy strategising on how to escalate this matter to national level‚ as it has now truly become a national problem.”