'Lady‚ your car is burning': another Ford bursts into flames 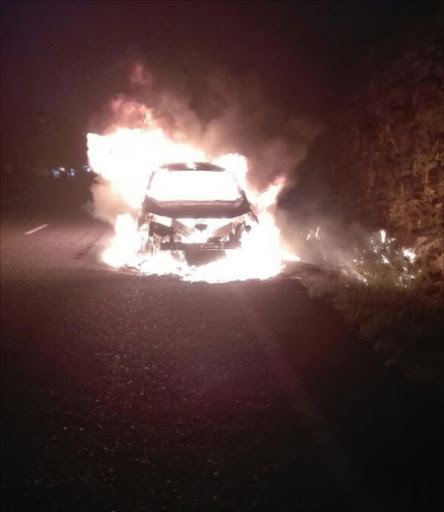 “Lady‚ your car is burning.”

Those words from a passing motorist gave Nomsa Dondashe enough time to get out of her Ford SUV before it was engulfed in flames on the N2 near East London at the weekend.

Somila Dondashe did not say it was a Kuga when she posted photographs of the burning vehicle on Twitter with the advice: “If you have a Ford‚ please return it‚ even when they insist nothing is wrong with the car. My mother’s car just burnt to pieces”. But many assumed it was a Kuga.

If you have a Ford, please return it, EVEN WHEN THEY INSIST NOTHING IS WRONG WITH THE CAR.
My mother's car just burnt to pieces.    pic.twitter.com/wHpynLtA6e

In was in fact a 2013 Ford EcoSport 1.5 litre‚ owned by her mother Nomsa‚ of Beacon Bay in East London.

Dondashe said she’d been complaining to a Ford dealership in East London about a “weird noise” in the engine for some time.

The noise intensified where she was driving to Umtata to attend a funeral with a friend on Saturday. On reporting this to the dealership‚ she was told that the only thing she could do was contact a breakdown service.

Dondashe chose to drive home‚ but about 20 kilometres before East London‚ the driver of a passing car flagged her down and said: “Lady‚ your car is burning.”

They abandoned the car before it was engulfed in flames. The EcoSport‚ which was insured‚ was towed to storage yard in East London.

More than 4‚500 Ford Kuga 1.6 models were recalled for compulsory safety checks in mid-January after about 50 of the SUVs burst into flames in South Africa and one of the vehicle owners‚ Reshall Jimmy‚ died while trapped inside his burning vehicle.

Investigations revealed that the fires were caused by overheating‚ which led to engine cylinder heads cracking and oil leaks. Recalled vehicles have been subjected to a software update and a check on the cylinder head.

Jimmy’s sister Renisha‚ who has documented the Kuga fires‚ told The Times that she knew of a few other incidents of EcoSports catching fire in recent months.

Asked to comment‚ a Ford SA spokesman said: “Ford South Africa is aware of the incident involving a EcoSport near East London on Saturday evening.

“The safety of Ford drivers is a priority for us. We will investigate the cause of the fire as a matter of urgency. Ms Dondashe was offered a courtesy vehicle.”

According to the Fire Protection Association of South Africa‚ there were 2‚128 vehicle fires in 2014 - an average of six a day.