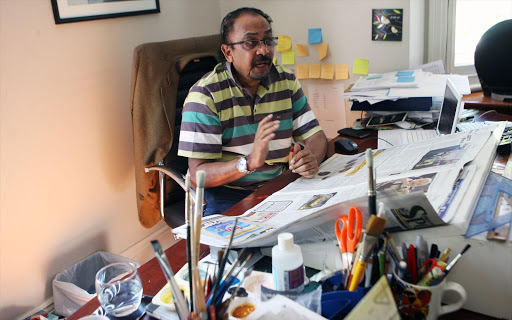 Famed Durban political cartoonist Nanda Soobben – who has mentored the likes of Sifiso Yalo – has defied a directive from the higher education department to shut his school.

Soobben‚ founder of the Centre for Fine Art‚ Animation and Design‚ was instructed to halt lessons after the department informed him that his accreditation to operate as a private higher education institution had been suspended for the second time within weeks.

Soobben has appealed against the decision‚ but has refused to stop tutoring his 20 students – half of whom are studying free.

His work was included in Nelson Mandela’s private collection and held by The Smithsonian Institute.

An on-line petition has been launched to save the school.

Soobben said the first time his accreditation was suspended was because he could not provide the department with his student database.

“I was robbed four times and forced to move premises.

“The department suspended our accreditation because we didn’t have our students' database‚ which had been stolen in the robberies‚ with all our computers. “We then set up a new database‚ appealed and were reinstated.”

In the latest development the school’s accreditation was suspended again when‚ following their move‚ they failed to provide the department with a health and safety report.

“We moved in a hurry because of the crime situation. But we got the report done and sent it within the specified time. They say the appeal is pending but we are still suspended.

“I put my own career on the block to run this school. I am just so tired and disappointed.”

Soobben said he was prepared to fight the matter in court.

“I opened the school because it’s about our students… they are the most important element here.”

The department failed to respond to questions.