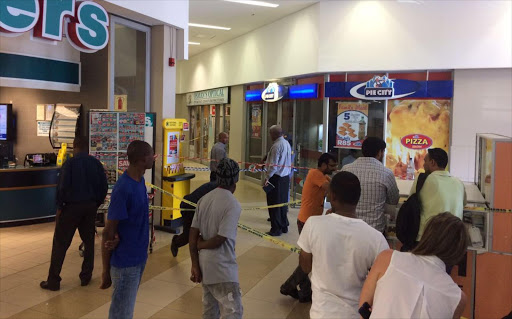 It is understood that the owner of the store had become engaged in a firefight with the robbers‚ one of the gunmen being felled in the process.
Image: JEFF WICKS

A suspected jewel thief was cut down in a hail of gunfire during a robbery gone awry at the Reservoir Hills Mall in Durban on Tuesday.

A well-placed police source with knowledge of the incident said that man had been part of a group who robbed the jeweller.

It is understood that the owner of the store had become engaged in a firefight with the robbers‚ one of the gunmen being felled in the process.

The mall was abuzz with activity‚ with the hall cordoned off as forensic investigators combed the scene for evidence.

The exterior façade of the building had been peppered by bullets.

One man‚ who requested anonymity‚ told of how he was nearly struck by a bullet which shattered the windows of a Nandos outlet.

“This one [he said while pointing to a hole] almost hit me. It was a matter of meters‚” he said.

ER24 spokesperson Russell Meiring said that paramedics attending the scene were led to the body of a man outside a shop.

It was later established that the shop is Sewraj Jewellers.

“Paramedics were led into a shop‚ where they found the body of a man‚ believed to be one of the suspects‚ lying behind one of the counters.”

The man had sustained numerous gunshot wounds and was in a critical condition.

“Paramedics treated the man and initiated advanced life support interventions. Unfortunately after approximately 20 minutes the man succumbed to his injuries and was declared dead on the scene.”