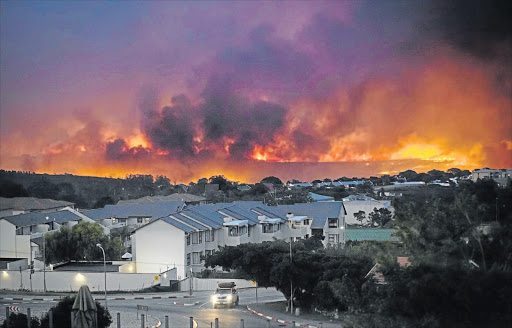 The fire was manageable but unpredictable as it kept changing direction, said Working on Fire spokeswoman.
Image: EWALD STANDER

A huge fire on the outskirts of Plettenberg Bay destroyed three homes on Tuesday night and led to the evacuation of residents.

The fire – which first broke out on Friday on the Old Plett Timbers property in Wittedrift but was contained on Monday – flared up again early yesterday in dry and windy conditions and was out of control by 2pm.

As night fell‚ a wall of flames covering an area of about 1 000 hectares stretched as far as the eye could see‚ with firefighters from across the region called in to assist.

By 7pm‚ at least three homes in the sparsely populated Wittedrift area had been razed and other residents evacuated. There are only a few houses in the area‚ on the KwaNokuthula side‚ which consists of mainly fynbos and veld.

Residents of the Formosa Garden Village retirement complex had also been told to evacuate‚ but the instruction was withdrawn when the fire veered away from the complex.

By 11pm‚ the fire was more manageable but unpredictable as it kept changing direction. Working on Fire spokeswoman Lauren Howard said aerial resources had been deployed several times since Sunday to fight the flames.