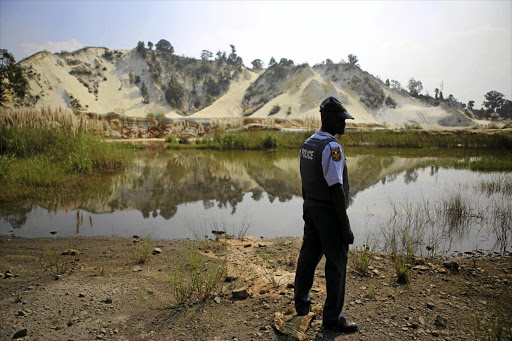 SCENE OF DEATH: A policeman looks at a mine dump near the scene where eight illegal miners were found dead in Benoni, east of Johannesburg, on Monday. It is suspected that the miners were killed by rival illegal mining gangs.
Image: ALAISTER RUSSELL

Turf wars between international crime syndicates are behind the deaths of more than 200 illegal miners murdered in the killing fields of South Africa's mines over the past four years.

The latest casualties are 14 illegal miners, known as zama zamas, who were killed at the weekend on Gauteng's East Rand.

The area has become the epicentre of a global battle between gangs for control of tons of precious metal in disused mine shafts.

At the centre of the war are an estimated 30,000 illegal miners who, say the UN's inter-regional crime and justice research institute and the Mineral Resources Department, are used by syndicates to steal about R7-billion worth of gold a year from South Africa.

The 14 bodies were found on Sunday and Monday, laid out in particular patterns. On Sunday six were found along a railway line in Benoni. The rest were found on Monday on the banks of a nearby stream. They are believed to have been killed elsewhere before they were dumped.

The UN institute's 2016 report says in 2011 the world's illicit gold trade based in South Africa, Democratic Republic of Congo and Peru accounted for US$2.3-billion.

Behind the violence are armies of heavily armed thugs, allegedly including police, who help syndicates wage a war for control of the highly lucrative underground turf.

The majority of victims are Zimbabwean, Mozambican and Lesotho nationals used by the syndicates for their mining skills and years of knowledge on the layout of disused mine shafts littering the Reef, the Free State and Mpumalanaga.

Miners, fearing for their lives, have started to arm themselves against gangs that wait for them on the surface and have shopped out their protection to hired guns.

This, say researchers, security companies and monitoring groups, has increased the violence, with shootouts often occurring.

West Rand illegal miner Lenmore Mwarera said: "There are people now that are self-appointed, who guard the entrance of all the places we go into. They are there to make sure no one goes down there with anything that can harm another person (guns, knives, sticks), because there used to be a lot of crime before."

Frans van der Linde, whose company Blue Hawk Security works on several East Rand mines, believes in the past 18 months nearly 150 people have been killed by gangs seeking control over mine shafts.

"Month on month we find these guys' bodies."

He said they had witnessed police robbing the zama zamas as they emerged from the shafts.

Van der Linde claimed that, in December, as his officers tried to arrest 12 zama zamas, police opened fire on them, allowing the miners to escape.

"They ran to the police car, loaded their bags in the vehicle, and ran away," he said. Van der Linde believes the latest killings could be linked to a rival gang trying to claim control of the area.

He said the strength, in terms of weapons the gangs carried, was not to be underestimated.

"We have engaged these guys in some serious gun battles before."

Mining Affected Communities United in Action national co-ordinator Meshack Mbangula, who works closely with zama zamas and other small-scale miners throughout the country, said the syndicates attacked the miners as they emerged from the shafts.

"These things didn't happen in the past, but with the involvement of police it has become worse. The police would wait for the guys and rob them and sell off their gold."

Mbangula believes that criminal gangs cottoned on to what the police were doing and began running their own extortion rackets.

"Police have tasked a team of detectives to investigate the murders," he said.

He said the motive for the killings was unknown and that none of the dead had been identified.

Dlamini said all investigations into illegal mining were being conducted by the Hawks.

"These investigations are sensitive. There are several major operations under way."

"A study estimates that about 10% (R7.3-billion for 2013) of gold production is stolen and smuggled out of the country annually.