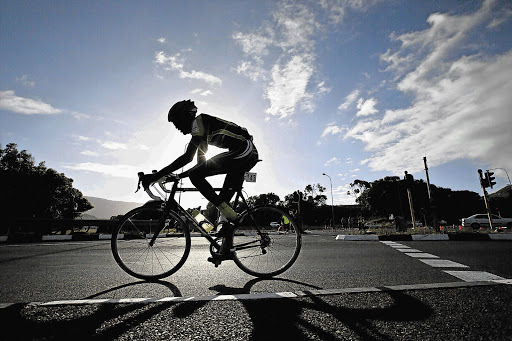 SADDLE SORE: If you want to start training from scratch for the Cape Argus Cycle Tour in March, think again. Overdoing the pedal pounding will break your legs, heart and posterior - not to mention your wildly ambitious new year resolution
Image: HALDEN KROG

Wind‚ fire and the risk of protest action resulted in the decision to cancel the 40th edition of the Cape Town Cycle Tour on Sunday.

It was the first ever cancellation of the event in which 35‚000 cyclists - including many from abroad – would have participated.

Videos taken at the starting point of the Tour in the City's foreshore showed cyclists being blown off their bicycles.

The organisers stated during a media conference on Sunday morning at the Southern Sun Cullinan Hotel‚ where many of the cyclists from overseas were staying‚ that the decision was made to protect the participants from “potential fatality” especially as the riders would have had to traverse Chapman's Peak.

“This morning presented a number of challenges‚ not least of which were wind speeds considerably higher than predicted yesterday‚” said the marketing‚ media‚ and sponsorship director of the Cape Town Cycle Tour Trust‚ David Bellairs at the conference.

"This‚ combined with a large fire that broke out in Hout Bay in the early hours of this morning‚ an the added risk of protest action en route‚ were all contributing factors to the decision made in our Joint Operation Centre VOC commander to stop the event‚” he said.

A protest broke out near Masiphumelele which forced the route to be shortened. Richard Bosman‚ City of Cape Town Safety and Security executive director‚ said the protest seemed to be about "contention on land" in the area.

The City's firefighters were also battling a blaze in the Imizamo Yethu informal settlement in Hout Bay. A massive effort was still underway to help victims after at least 650 homes were destroyed.

All of the Powerade and Coca Cola which was brought in for the Tour was now being redirected to help the victims.

"We're currently sitting in a drought scenario here in Cape Town‚ as a result fires have been a problem. The decision to move the event to a different date I think is something that needs to be discussed by the board of trustees. I think it's highly unlikely at this point‚" said Bellairs.

When asked whether they would start the Tour at a different point in the future he said: "It's the first time that we've had these kind of wind speeds at the foreshore and it could very well be a possibility."

Bellairs said no one would be refunded for the event.

Cyclist Greg Anderson from Cape Town said he understood why the race had to be cancelled and that he would do it again next year.

“I'm from Cape Town so it's not a major train smash that it was cancelled. I just feel for all the guys and girls that have come from far away‚” he said.

He suggested that the organisers reduce the fees by half for next year's registration for the people who were going to ride this year and donate the rest of the money to charity.

“The sad thing is the expenses and man hours that have gone into it already - setting it all up‚ the tents‚ the registration‚” said Anderson‚ who has done two Tours before.

“They cancelled the New York Marathon a few years ago because of the hurricane and that was devastation‚ this was a bit of wind. I think there's going to be a lot of pissed-off people but I'm not one of them‚” he said.

Two participants from the UK‚ Philip Robinson and his wife Caroline‚ said the Tour would have been the “icing on the cake” of their visit to South Africa.

It cost them about R40‚000 for the flights and luggage - including more than R6‚000 just to transport the bicycles. The couple were walking out of the Cullinan Hotel at around 7 am on Sunday morning when they were told it was cancelled.

“Judging by the videos I've seen of people starting I think it was probably the right decision. Disappointing of course‚ but that's not the only reason we came to South Africa‚” said Philip.

They were in South Africa for more than a week and it was the last thing on their list before they flew back to England on Monday.

“We've been looking forward to it for the last few months‚ especially my wife‚ she doesn't get to cycle as much as I do‚” he said.

“We booked it last April‚ so it's a little disappointing‚ but I'm glad I'm not cycling in that wind‚” said Caroline.

Philip said they knew that they wouldn't be refunded if something happened and said the costs were already incurred by the organisation of the event.

He said he didn't think it would affect the event's international reputation.

“It's not as if it happens every year‚ it's an unforeseen event‚ the winds were particularly strong‚ nothing you can do about that‚” he said adding that they would come back and try again.