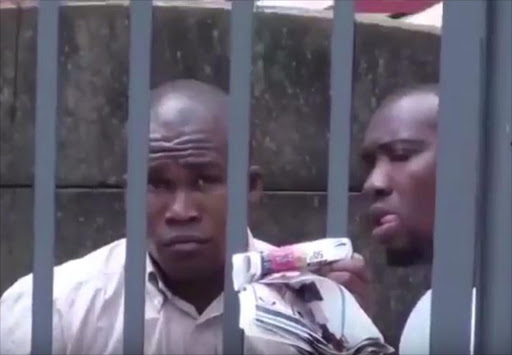 Men caught trying to break into a house in Johannesburg.
Image: Screengrab via Youtube/TimesLIVE

A video of three men trying to break into a house in Johannesburg is making news halfway around the world.

An Orange Grove resident foiled the robbery and filmed it all. While it is no laughing matter‚ it has had people chuckling even in Australia‚ where it featured on that country's Nine News network.

First seen on a community WhatsApp group‚ the video shows three men attempting to gain access to the property by breaking open the palisade gate.

The homeowner is alerted to the break-in and goes out armed with a camera to film what is happening. The would-be robbers do not notice the man as they try to force the gate open with a crowbar‚ not until he clears his throat to let them know he is there.

The three bemused men look up at the homeowner‚ before turning to each other and then deciding to escape.

A neighbour confirmed that a criminal case has been opened.