WATCH: Jewel robber left behind as getaway car speeds off without him 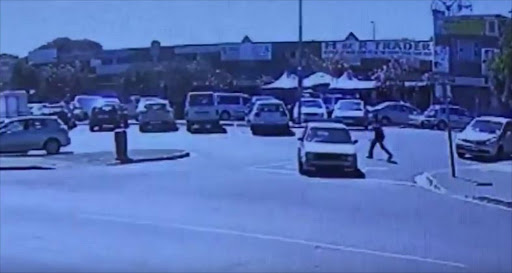 They say there’s no honour among thieves‚ and that proved all too true for one hapless member of a gang who robbed a Cape Town jewellery store. Three of the men made it to their getaway car at Gatesville shopping centre in Athlone.

But when a running accomplice failed to catch up with the moving car‚ they sped off without him.

Footage from a CCTV camera shows the man flinging jewels worth R50,000 to the ground before being pounced on by two law enforcement officers.

City of Cape Town law enforcement chief Wayne Dyason said‚ "On Monday officers were alerted to a robbery at a jewellery store by four suspects in a white VW Golf".

"They searched the parking area and spotted the vehicle. The driver sped off but left one of his accomplices behind. The suspect tried to make a run for the departing vehicle but the long arm of the law got to him first."

The suspect faces a charge of armed robbery. In another incident‚ law enforcement officers saw a diver near Bailey's cottage in Muizenberg on Wednesday.

"Officers held the man while colleagues searched the water for any hidden abalone. They found a bag containing abalone hidden among the rocks‚" said Dyason.

When the suspect was taken to Muizenberg police station it emerged that he was on parole for a prior abalone poaching conviction.