Pretoria man gets death threats after being mistaken for Spur bully 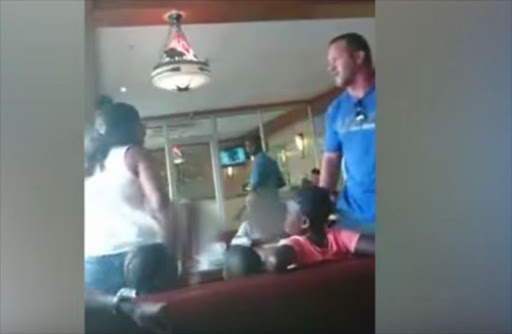 Video footage of the altercation at Texamo Spur - in The Glen Shopping Centre in Johannesburg
Image: YouTube/TimesLIVE

A Pretoria man says his life has been turned upside down after he was falsely identified as the man who aggressively grabbed a woman and threatened to assault her at a Spur restaurant in Johannesburg.

The incident happened at the Texamo Spur at the Glen Shopping Centre at the weekend.

Jacque Payne’s number and home address were published on Twitter and both were alleged to belong to Nico Viljoen‚ the man implicated in the Spur brawl.

“We have been receiving death threats and I don’t even know who Nico Viljoen is. I haven’t even been to Joburg in two or three years‚” Payne told TimesLIVE.

“My family and I can’t even move. We have nowhere to go‚” he added.

He believes the person who posted his contact details on social media is a Telkom employee.

Payne has tried all avenues to resolve the issue but he claimed the police were unable to assist.

His mother‚ Anneline‚ took to Facebook to vent her frustration.

“If I find Nico Viljoen‚ he will regret being born. We as a family have been to hell and back today because of the Spur incident. We have had over 400 calls‚ some great people were spoken to‚ some not so nice‚” Anneline Payne wrote.

“We distance ourselves from Nico Viljoen. We have no idea who or where he is‚” she said.

She begged for people to stop calling her son‚ adding that they were being unfairly harassed.