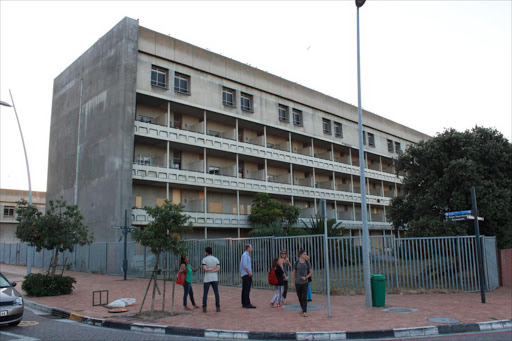 The Helen Bowden Nurses Home has been occupied by Reclaim the City protesters.
Image: GroundUp

Both of the buildings currently being occupied by civil society group Reclaim the City‚ could be ready to use for housing within a month‚ activists there said.

The Helen Bowden Nurses Home and the Woodstock Hospital in Cape Town were illegally occupied by supporters of the group on Friday‚ two days after the Western Cape government announced the sale of the Tafelberg School in Sea Point.

A campaign by RTC to halt the sale proved unsuccessful when the site was sold to the Phyllis Jowell Jewish Day School for R135 million. RTC want the site to be used for affordable housing.

Instead‚ Premier Helen Zille's cabinet said it had identified the Woodstock Hospital and the Helen Bowden building as sites for affordable housing in the city.

But in a statement released on Monday‚ RTC said the province made “vague affordable housing commitments” on the buildings. “We believe that these are not real commitments‚” the statement said.

“The Western Cape Government has proven that it is not serious about using its portfolio of well-located land to reverse spatial apartheid in our city.” Six people had occupied the Helen Bowden and there were five people in rooms at the Woodstock Hospital. Both buildings have electricity but there only the Woodstock Hospital had running water.

Despite this‚ occupants of both buildings said that neither site required “major refurbishment” before it could be ready for occupation. “The building is in great condition. It has fitted rooms and electricity and only requires a clean up and then it would be perfect for affordable housing.‚” RTC supporters at the nursing home said.

The groups said they would remain in the buildings until the city met its demands to stop the sale of Tafelberg‚ and provided a clear timeline for affordable housing at Helen Bowden and Woodstock Hospital.

“The only other way we will leave is through a court order‚” a supporter said. Last week Zille's spokesman Michael Mpofu‚ said that the Tafelberg site fell outside of the “restructuring zone”‚ and that the nursing home had a high cross-subsidisation potential for affordable housing.

“The cabinet further instructed that any proposed disposal or use of the old Woodstock Hospital site be brought to cabinet for its consideration‚ with the intention to resolve that affordable housing be included on the site‚ as a whole or in part‚” he said.