WATCH: ‘I do magic with my hands’ - see a doctor bring order to trauma in a Mitchells Plain hospital 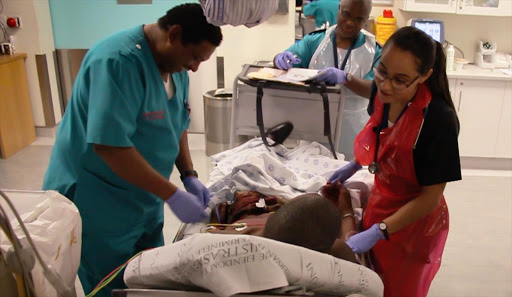 This video is part of TimesLIVE's “On shift” – a 10-part video series proudly brought to you by 1Life Insurance. Every week until the end of May, watch exclusive videos giving unusual insight into the lives and perspectives of people working in interesting professions in South Africa.

Gunshot wounds, stabbings and blunt trauma are the order of the day inside one of South Africa’s most notorious “hidden” public spaces, the emergency unit at Mitchells Plain District Hospital in Cape Town.

This is invariably where many victims of the Cape Flats’ simmering gang wars are brought. TimesLIVE now offers an exclusive behind-the-scenes glimpse into the work done there by dedicated medical professionals.

Domestic abuse and other forms of interpersonal trauma are all in a night’s work for Dr Raisa Aysen, especially as the end of each month approaches.

Aysen and her team are “on their feet all night” at the facility, she says, stitching up bloody wounds but at the same time she describes the joy of saving a life. A tiny radio plays softly in the background, keeping the team motivated and awake during their gruelling shift. Aysen is not one to shy away from blood or the reasons why it flows so freely in this notorious part of the Western Cape.

“I get to do magic with my hands,” she says. Victim after victim arrive on stretchers and, no matter what, the medical team have each other’s backs. There is no such thing as “taking a break” because, she says calmly, “all the patients have to be seen to”.

According to the latest crime figures by Statistics South Africa, Cape Town had the highest number of reported assaults in the country over the 2014 – 2015 period – a whopping 38,780 cases.

Mitchells Plain contributed significantly to this, and drugs and alcohol played a big part in the assaults. In 40% of home assault cases and 33% of street assault cases, the perpetrator was under the influence of drugs or alcohol.

Everyone has a story. 1Life can secure what your future story holds.

Get a quote tailored to your needs today. Click here.