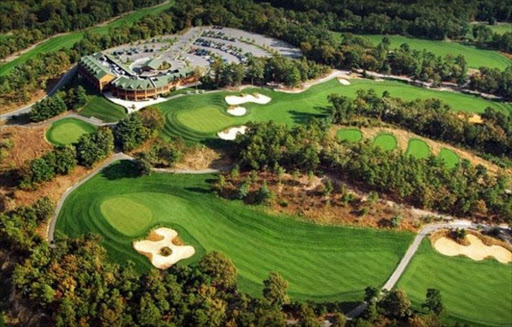 While the ANA Inspiring Women in Sports Conference was under way this week, a plane flew over Mission Hills towing a banner reading: "USGA & LPGA: DUMP TRUMP".

The banner, sponsored by women's advocacy group UltraViolet, referred to July's US Women's Open championship scheduled to be played at the US president's Trump National Golf Club in Bedminster, New Jersey.

Many people have called for the championship to be moved in light of Trump's controversial remarks about women during his presidential campaign.

But the game is still on for Bedminster and LPGA commissioner Mike Whan said most of the tour's players prefer not to mix politics with sport.

"It's obviously got the attention of a lot of people and I think I probably get about 50 calls a day from both sides of the coin," LPGA chief Whan said. "The one comment I've gotten consistently from players is 'don't let politics get in the way of our opportunities'."

The Women's Open is run by the US Golf Association, not the LPGA, though most of the competitors will be LPGA members.

UltraViolet said more than 100000 people had signed a petition calling on the US Golf Association and LPGA Tour to move the event, which it says would provide Trump millions of dollars in revenue, free advertising and branding.

Lizette Salas, the daughter of Mexican immigrants, said she looked forward to competing.

"I've gotten requests to boycott it and to not play in it because of what he has said," Salas said. "For me, it's a golf tournament, regardless of whose name it is, or who is hosting it. It's our national championship and I wouldn't miss it."

There has been some opposition to Trump from LPGA players, with England's Jodi Ewart Shadoff against the site of the Open.

"On principle, I feel it's just not right," Ewart Shadoff said before Trump was sworn in.

LPGA commissioner Whan said politics should take a back seat.

"I certainly will not let either my political views or anyone else's get in the way of the best opportunity for women in this game," he said.