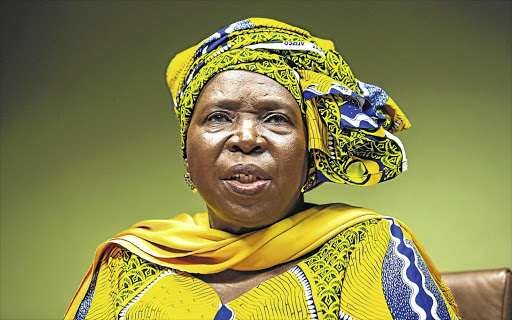 South Africa is at risk of a revolt by the ANC Youth League, according to former AU Commission head Nkosazana Dlamini-Zuma.

Dlamini-Zuma gave the warning yesterday in Durban at the close of the ANC Women's League eThekwini three-day elective conference.

Dlamini-Zuma, who steered clear of commenting on last week's cabinet reshuffle, warned that unless the economy became more inclusive of young black people and women the country could expect a revolt by the ANC Youth League.

"We are not seeking to put women above men but we don't want women to be treated as second-class citizens."

The former wife of President Jacob Zuma, Dlamini-Zuma has been endorsed by the women's league and the youth league to be the ANC's next leader.

She said women continued to be "largely excluded from the main economy because of the colour of their skin" - since many companies "happen to be led and dominated by white males".

"This is not sustainable. You can't have a country where the majority are not part of the main economy," she said.

"If we don't change this situation the young lions [ANC Youth League] will revolt. It's an imperative ... we don't have a choice. We are saying [the economy] must include more black, more young, and more female ownership."

She said laws afforded women equal rights in all sectors of society, but attitudes needed to change.