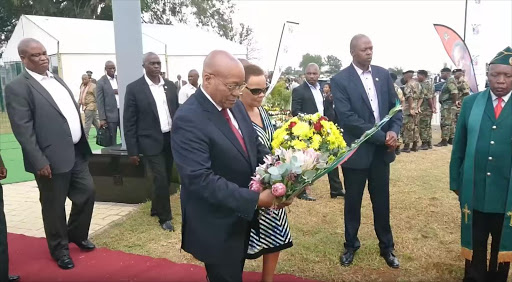 Zuma made his comments at a wreath-laying ceremony commemorating the 24th anniversary of assassinated SACP leader Chris Hani's death.

"Placards at the marches depicting monkeys indicated that our white counterparts view black people as less of human beings or subhuman. We cannot allow racists to take our country backwards," Zuma said.

The crowd of supporters welcomed the president's speech with loud cheers and songs in his honour. As Zuma spoke, opposition parties were detailing plans in solidarity with the #ZumaMustFall campaign.

The mass action will start with a march to the Union Buildings in Pretoria tomorrow, leaders from all major opposition parties said at a joint press conference in the capital.

The parties plan to stage a number of protests, such as the "national day of action" in the coming days, weeks and months - intended to force Zuma to quit.

"We are going to roll out mass action leading to the 2019 elections. It's not about the EFF, it's because we love South Africa. If you love South Africa, Zuma must leave now," said EFF leader Julius Malema.

UDM leader Bantu Holomisa said the cabinet shake-up in which Pravin Gordhan was axed as finance minister had "started a domino effect, with the rand tanking, the country's downgrade by two ratings agencies and the downgrading of some banks and Eskom."

The UDM has filed an urgent application in the Constitutional Court asking that motions of no confidence against Zuma in parliament next week be decided by secret ballot. Parliament has said it will oppose the application.