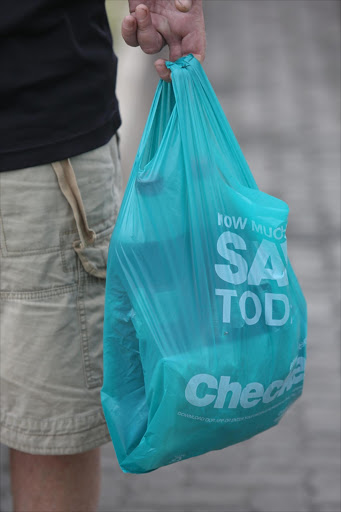 A shopper carries a Checkers bag, the only chain that is using recyclable bags.
Image: JACKIE CLAUSEN

The department of environmental affairs has launched an investigation into claims that "recyclable" plastic shopping bags cannot actually be recycled‚ following a Sunday Times report at the weekend.

The newspaper reported on Sunday that plastic bag manufacturers were adding cheap fillers to the plastic to save costs‚ but that this made the bags un-recyclable. Now the department said it took the allegations seriously‚ and was going to make sure that recycling standards were met.

"The department takes the allegations contained in the article seriously‚ and will be liaising with the National Regulator for Compulsory Specifications (NRCS) and the South African Bureau of Standards (SABS) to ensure that manufacturers of plastic carrier bags comply with the regulatory requirements and standards of their products‚" it said in a statement.

Spokesman Albi Modise said that the regulations on plastic bags‚ implemented in 2003‚ were a "bold move to address the challenge of plastic bag litter".

"The regulations essentially made the provision of thicker‚ more durable plastic bags compulsory. In terms of the regulations‚ the plastic bags ought to be recyclable‚ thereby making them more environmentally friendly. The new thickness also made them more reusable‚" he said.

Modise continued that Treasury was collecting a Plastic Bag Levy‚ which was meant to support recycling initiatives.

"The waste recycling economy will not only eliminate threats to the environment‚ but also positively contribute to the growth and development of South Africa’s economy. It is through this economic ingenuity that the DEA will also contribute to sustainable development and inclusive green economic growth thus facilitating employment creation‚ infrastructure and skills development‚ and strengthening Small Medium and Micro Enterprises (SMMEs) in the waste management sector‚" he said.