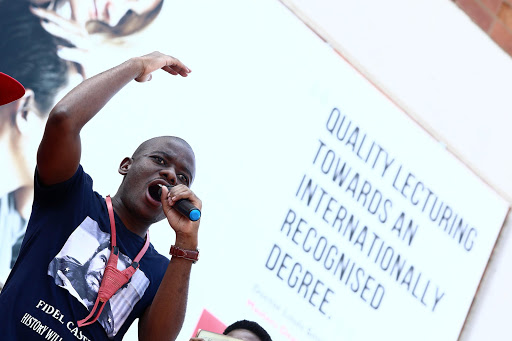 “I want to reiterate that 2017 is going to be the final round of colonial education. We are removing it. We will replace it with free and decolonised education. As the generation of 2017 if we want free education to be a reality we must be prepared to sacrifice," said Fees Must Fall activist Bonginkosi Khanyile upon his release from prison on 2 March 2017.
Image: Thuli Dlamini

Speaking to TMG Digital on Wednesday morning‚ Khanyile confirmed that he passed his National Diploma in Public Management and Economics.

"I'm graduating on Tuesday‚ 9 May‚" he said in a brief phone conversation. "I wrote exams in prison. It was a difficult experience."

He said that he was currently enrolled for his post-graduate course in the same subject.

After the news was revealed on Twitter on the @FeesMustFall2 account‚ messages of support and congratulations flooded in on the social networking site. Among those who lead the cheers was former public protector Thuli Madonsela.

"Congradulations Bonginkosi Khanyile. What a great example to set. As Madiba said‚ education is the most effective liberisation tool‚" she tweeted.

Khanyile was arrested for being part of protests at DUT in September. He was denied bail on several occasions and was only released after taking his matter to the Constitutional Court in March.