‘I have no interest in being famous’ – Rachel Dolezal 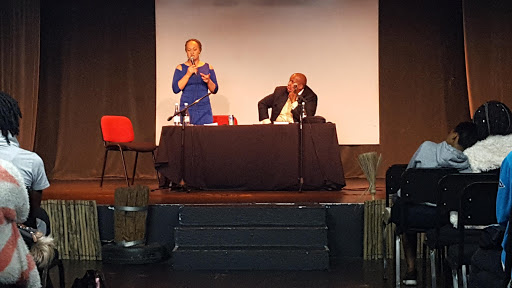 Controversial 'trans-race' activist and author Rachel Dolezal has explained her switch in identity – from white to black – as the result of a “decolonised mind”.

Dolezal cried on a small stage at the Johannesburg Theatre on Wednesday morning‚ saying it was difficult to speak about her personal life while simultaneously promoting her upcoming memoir.

She claimed that she had “decolonised” her mind – although many in the crowd remained sceptical.

“People have had a lot of questions about me about my personal life. And I answer all those questions in my book‚ in my memoir. If you are really curious‚ you can go there‚” she said.

“But I think we are here today to really engage in this larger conversation because even though I may have had somewhat of a unique racial journey or experience‚ race is something that affects us all. It’s a global issue. Decolonisation of the mind is something that each individual has to contend with and people as groups have to contend with through laws and policies.”

Dolezal‚ a controversial author and activist from the USA‚ caused a media storm in 2015 when she was ‘outed’ as being born to white parents – despite claiming to be black.

She was president of the National Association for the Advancement of Coloured People (NAACP) Spokane‚ Washington chapter for just five months before her parents‚ white fundamentalists living in Montana‚ told a local newspaper she was actually Caucasian.

Dolezal holds a Masters in Fine Art degree from Howard University but told The Guardian she has since applied for more than 100 jobs without success‚ and has resorted to food stamps to feed her children.

However the organiser‚ Bishop Clyde Ramalaine‚ began the session by emphasising the fundamental purpose of the Quest for Non Racial South African Society Dialogue (QfNRSASD)‚ which hosted her as guest speaker‚ was not to place focus on Dolezal herself.

He said Dolezal was merely a guest speaker and that Quest should not be defined by her.

“The idea is not to focus on who we bring in‚ as it is we do attract controversy in that regard.”

He explained that Quest was merely attempting to facilitate helpful dialogue on all levels of society to further the aim of creating a non-racial‚ non-sexist South Africa.

But while he claimed not to be promoting Dolezal’s new book‚ titled In Full Colour‚ he did tell the roughly 100 guests that it was available for sale outside the venue.

The discussion itself centred around Dolezal‚ who told the students from City Varsity a “small part” of her life story‚ how she first came to realise she identified as black and later began to advocate for black rights in university and later life.

She also spoke about physical and emotional abuse she suffered at the hands of her parents and ex-husband‚ as well as the community of Spokane.

“Everybody jumped on social media to mock me‚ to shame me without having any information about my story‚” Dolezal said.

“And the most heartbreaking thing for me was that my sister did not get justice‚ but I didn’t want to put her business out there until her case was finally fully dismissed‚” she continued‚ speaking about a case of rape her sister had opened against her biological brother.

Dolezal claimed this is the reason her parents “exposed” her‚ because of the case against their son.

As with the event at the University of Johannesburg on Tuesday night‚ the questions from those in attendance were critical‚ hard hitting and pointed.

“At what point in your life did you officially identify as black? At which point did you take on the advantages and disadvantages of blackness?” one student asked.

Another pointed out that if ‘trans-race’ was a thing‚ as Dolezal believed‚ by virtue of that one could decide as a black person to be ‘white’.

“How do you propose they transcend the poverty that is concomitant to blackness?”

And she was asked “Why are you here? What are you hoping to get out of this?”

“I am not expecting to get anything out of this‚ it’s actually very difficult for me to continue talking about my personal life‚” she said.

“I have no interest in being famous or making this an issue. It was not my choice to blast my name around the world.”

“I was going about the very work of focusing those disproportionalities‚ disadvantages‚ those gaps in the institutionalised racism world of Spokane‚ Washington‚ which is probably 50 years behind the rest of the US. There’s not some kind of mission that I am on to make ‘trans racialism’ a thing‚ because I don’t even believe in it‚” she continued.

“But I do believe that we can face that race was created by racism‚ by the energies of oppression‚ by the need to classify people in order to leverage power and privilege‚” she said.

Outside the venue meanwhile a small group of Public Order Police were stationed and officers would not confirm to TimesLIVE if they were there specifically for the Dolezal talk.

City Varsity students‚ who did not wish to be identified‚ told TimesLIVE they did not really understand why Dolezal was here.

“She told us all about her hard‚ sad life and as human beings‚ of course we are going to sympathise‚” said one student.

“But it isn’t all about that. Why didn’t she answer the questions? She kept going back and talking about her personal experiences. And that’s when I just switched my brain off‚” the student continued.