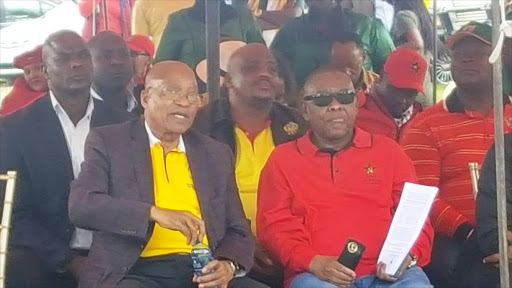 President Jacob Zuma was subjected to possibly his greatest humiliation yet when he was booed and prevented from making a speech by Cosatu members at a Workers' Day event in Bloemfontein yesterday.

The ANC alliance partner's May Day celebrations ended in chaos as persistent chanting, anti-Zuma singing and brawling between the president's supporters and opponents forced the organisers to call the whole thing off.

Zuma arrived at Loch Logan Park, Bloemfontein, surrounded by men in snappy suits and earpieces. He was expected to deliver the keynote address at Cosatu's main Worker's Day celebration.

Some carried placards reading: "Cosatu is dividing us. Declared that JZ cannot lead the country. But today they invite him to address. Who is fooling who?"

Several Cosatu unions had earlier said that Zuma should be asked not to attend the event in light of the federation's call for him to step down as president.

At 8am, a fence was erected to separate the crowd from a small stage in a corner of the park, and plainclothes police and security officials were circulating, checking under every rock.

By 11am, the park had started filling up. A long queue formed at the main entrance, where bags were put through X-ray scanners and guards made sure that everyone passed between metal detectors.

By 1pm, a large group was pressed up against the fence, screaming, singing and chanting: "Zuma must go."

They were held back by men and women dressed in ANC-branded clothing, while a line of police officers with riot shields formed up on the other side of the fence.

Cosatu's leaders had little choice but to abandon the event without a single speech being heard.

But to the left of the "Zuma must go" group was another, sporting red T-shirts emblazoned with "100% Zuma". They chanted and sang their support for him.

Zuma sat only a few metres away from the brawling, at times chatting and smiling, sometimes just watching the crowd.

Within minutes of Zuma leaving the park without speaking, ANC Free State spokesman Thabo Meeao told reporters that the disrupters "were bused in".

"It can never be workers from our province who have disrupted the rally. The briefing we have is that the majority of them were bused in from Kimberley to disrupt the rally."

Zuma was not the only ANC leader who was prevented from speaking at a May Day event.

ANC national spokesman Zizi Kodwa said it was "regrettable that such an significant, historic Workers' Day was reduced to political leadership differences. The day is not about President Zuma but about the workers".

Kodwa said the disruptions could be linked to the ANC leadership succession race.

"The incident is a consequence of what the ANC has been warning about, including the alliance partners, the [party's youth and women's] leagues and all individuals who have prematurely announced in public their leadership preferences," he explained.

At the park after the dust had settled, 57-year-old Bloemfontein resident Rebecca Matsika, wearing a Ceppawu T-shirt, said she did not come to hear Zuma speak.

"We don't have faith in him anymore. South Africa is crying. The workers are crying," she said.