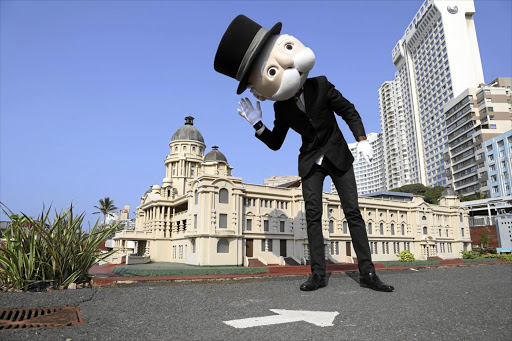 ON A ROLL: Mr Monopoly on a visit to Minitown in Durban
Image: JACKIE CLAUSEN

A Durban version of Monopoly is on the cards in which players will land on squares with names such as Dr Pixley KaSeme Street, Ushaka and Station Drive.

Durban residents are being urged to nominate and vote for their favourite city hot spots on a dedicated Monopoly Durban Facebook page launched yesterday.

Winning Moves has the rights to produce a regional version of the game.

It was responsible for Monopoly Cape Town, featuring Robben Island, and has produced more than 70 localised editions of Monopoly in the UK alone.

Sales manager Robert Osborne said Durban was one of the premier destinations in the country.

"Durban has long been one of the regions on our list of targets.We're extremely excited to see how it is received."

The board features 22 properties and could include shopping spots, educational facilities and sport stadiums.

"I'm sure the home of the Sharks will get more than a few nominations."

Five thousand copies of the Durban game will be made for the initial run. Osborne was confident they would sell. "Why play on someone else's streets? Yes, it's a nice gift for tourists but we think this will appeal mainly to Durbanites."

The game of Monopoly began in the early 20th century and regional versions of the game were first released 20 years ago.

The board game, that allows players to buy and sell properties using toy money, is played by more than 500million people in 43 languages and in 111 countries.

The Durban version will be available in November.