WATCH: Hijackers speed off with passengers after shooting, killing driver at OR Tambo 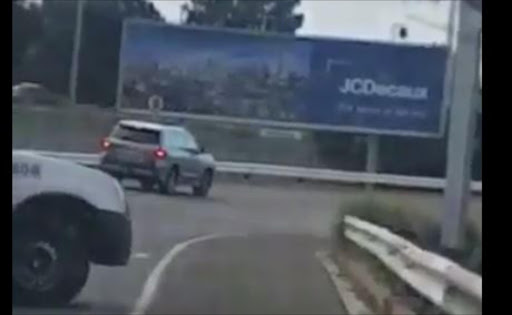 Footage of the incident at OR Tambo International airport was shared on social media.
Image: Twitter/Abuti Engineer

A driver was shot dead near OR Tambo International Airport this afternoon and his vehicle‚ transporting six passengers to the airport‚ was hijacked.

The incident‚ that took place at about 4.30pm‚ was filmed by a motorist and shared on social media.

Where do people get assault rifles and shoot people like they're dogs? Worse it had to happen at #ORTambopic.twitter.com/nI30Svjhxu

Police said the driver of a Hyundai H1 motor vehicle was shot dead by a brazen group of criminals.

As he took the off-ramp to the airport‚ the vehicle was blocked by two other vehicles‚ one a black VW Golf‚ whose occupants shot and fatally wounded the H1 driver‚ De Beer said.

The suspects then jumped into the H1 and drove off with the passengers. They were later abandoned in Rhodesfield‚ Kempton Park after being robbed of their belongings‚ including cellphones. No one was injured‚ according to initial reports‚ De Beer said.

“We would not at this stage want to speculate on the motive for the crime. Once we have further facts at our disposal gathered from the crime scene‚ victims‚ witnesses and other relevant evidence‚ we will be in a position to make further details available‚” Phahlane said.