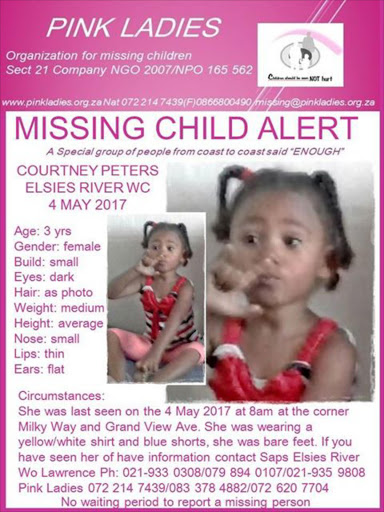 Police fired rubber bullets to disperse a crowd outside a Cape Town court on Wednesday as the man accused of murdering and raping a three-year-old was driven away.

Earlier‚ about 20 police officers maintained order in the Goodwood Magistrate’s Court for the appearance of Mortimer Saunders‚ 40‚ about half of them forming a cordon between the defendant and the public gallery.

Saunders was arrested on Sunday‚ a day after Courtney’s body was found. She disappeared from outside her Elsies River home on May 4 and her body was found in an open field in Bofors Circle‚ Epping Industria.

National Prosecuting Authority spokesman Eric Ntabazalila said Courtney was the 19th child murdered in the Western Cape so far this year. “It is a sad situation we find ourselves in‚” he said.

There were gasps in court on Wednesday when two charges of rape‚ as well as charges of kidnapping and murder‚ were put to Saunders‚ who lived with Courtney’s family.

Defence attorney Collin Lakay asked that Saunders‚ a call centre worker‚ be kept in the hospital at Goodwood Prison because he feared for his life in the awaiting-trial section.

After the case was postponed to May 24‚ chaos broke out outside court where more than 100 people demanded the police hand Saunders over to them. Rubber bullets were fired.