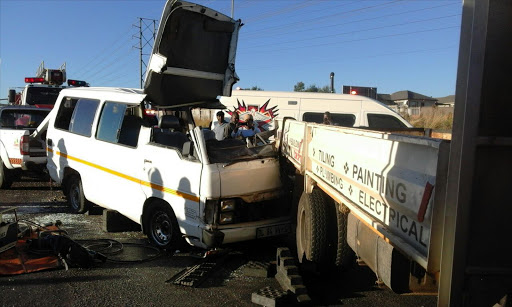 The scene of the accident in Midrand, Johannesburg, on Wednesday morning.
Image: Emer-G-Med

Fourteen people were injured‚ one critically‚ when a taxi crashed in Allandale Road‚ Midrand‚ on Wednesday morning.

Emer-G-Med operations manager Jurgen Kotze said the taxi drove into a flatbed truck‚ after which the driver fled the scene.

“The taxi went into the back of the truck‚ leaving the passenger in the left front seat trapped and in a critical condition. The front seat passenger had to be cut out of the vehicle and was freed after being trapped for over 40 minutes‚” said Kotze.

All 14 passengers were transported to hospital.

The driver of the taxi is still on the run.