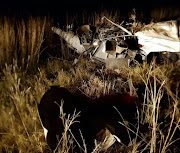 Image: ER24 The wreckage of a helicopter which crashed in Heilbron on Friday.

Two people were killed and two others‚ including a fourteen-year-old‚ sustained serious injuries when a helicopter crashed in Heilbron in the Free State on Friday night‚ paramedics said.

“It is understood that the helicopter crashed in Heilbron and local emergency services were dispatched to the scene. Upon their arrival‚ they found two men inside the helicopter with fatal injuries‚ said ER24 spokesman Werner Vermaak.

“A fourteen-year-old and 49-year-old were found outside the helicopter with serious injuries. They were treated on scene and rushed to Heilbron clinic. ER24 was called to the clinic to assist with stabilisation. The two were later rushed to a hospital in Johannesburg for further treatment‚” Vermaak said.

He said it was not clear where the helicopter had taken off or where it was flying to.

“Local authorities attended the crash site and will investigate.”