Dungeons of gold: Sex, booze and braais in underground mine cities 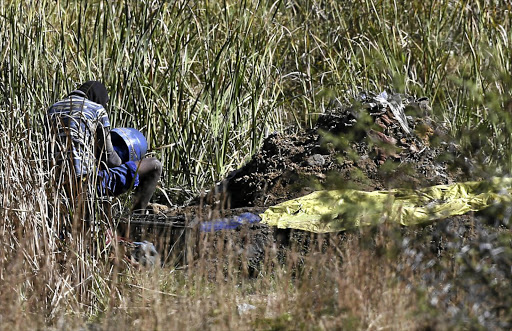 RICH HAUL: An illegal miner pans for flakes of gold next to G-Hostel on the outskirts of Welkom.
Image: PHILL MAGAKOE and VISTA NEWSPAPER

Millions of rands in sex, food and alcohol is being traded in secret underground cities linked to illegal mining activities in small towns such as Welkom in the Free State.

The town, once a hive of legal mining activity, was the site of one of the worst illegal mining disasters South Africa has seen when at least 34 "zama zamas" were killed in an underground explosion last week.

In the aftermath of the explosion illegal miners, police and mine security experts have told stories of underground passages and tunnels in which everything is available for a steep price.

The existence of more than 6000 disused gold, chrome, diamond and platinum mines across South Africa has allowed for the creation of a thriving underground economy. One mining expert says the underground industry supports thousands above ground.

Sex is also for sale.

"What do you want? That's what they ask you before you go down," said Richard*, an informal miner. "Believe me it's true, you can even buy airtime for cellphones."

For Roberto*, Welkom has proved to be an unexpected gold mine.

"If it wasn't for them [illegal miners] I would have been long gone, living in Joburg. They [the government and mine management] say that the mines are dead but it's rubbish. These guys come with cash. They rock up with R100000."

Roberto said the orders are mostly for tinned food, bread, Coke and alcohol.

"Sometimes they come with gold. We trade the gold for food, booze and for things they need to survive underground. Who are we to say no? We don't ask questions."

Once bought, the supplies are taken to "madala sites", which are areas in disused mining shafts that serve as mini villages and rest sites. Illegal miners who have spoken to The Times said the madala sites are also used in cases of tragedies for recovering and identifying bodies. They also contain makeshift sickbays where those who are injured can be treated and recuperate.

Philip*, who is involved in security at one of Harmony Gold's mines in Welkom, said the madala sites had transformed the disused mines into another world.

"There are entire towns down there. People go down specifically to sell. Some go down for sex. That costs R2500. The sex is from either prostitutes that are brought down or from legal women miners. When they take their shift breaks they meet the illegals for a few hours," said Philip.

He said the syndicates which run the illegal industry have connections to help them source what is required.

"They make it easy for traders. They offer them cash in large sums. They have connections in bottle- stores, wholesalers, cellphone shops, battery stores and protective clothing businesses," he said.

Philip said mine security and legal miners would often hear the zama zamas on their days off because they play loud music and party underground.

"When we go down there we can hear them, the sound travels. Sometimes it sounds like you are in a nightclub."

But for the police prosecuting those involved in the underground industry it is nearly impossible because it is hard to collect evidence.

A Welkom police station sergeant, who cannot be named as he is not authorised to speak to the media, said of their battles with the zama zamas: "All we can do now really is run disruption operations. When we hear of storage sites we raid them and confiscate their goods. But in the end we have to give their parcels back.

"You can't arrest people for being in possession of food. We often find farms being used as fronts for packaging their food. It's not just one farm, but dozens. The farmers get big kickbacks for allowing disused storerooms to be used as packing and storage facilities," said the police officer.

"When we do catch them making these food parcels, we cut open the packs so that they have to do it all over again. It's all we can really do to frustrate them."

A Welkom SAPS member shows confiscated food parcels recovered in raids and suspected to be due to be delivered to ‘zama zamas’ underground. Picture: PHILL MAGAKOE and VISTA NEWSPAPER

Wits University anthropologist Robert Thornton, who specialises in studying illegal mining, said it "had a very big impact" on the economies of mining towns.

He said the importance of illegal mining was that the economic activity was diffused among the entire community.

Thornton said should illegal mining suddenly stop overnight in a mining town, it would have "a major impact" on the area.

"Very few people realise how important it is to the economy of these mining communities."