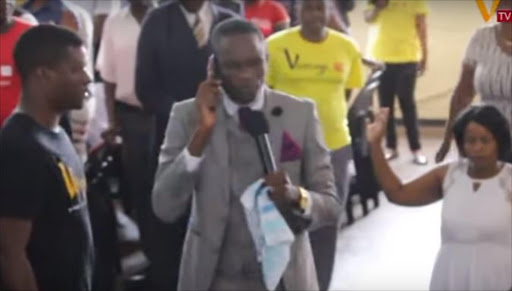 Just when you think you have seen it all‚ a Zimbabwean pastor has filmed himself having a telephone conversation “directly with God”.

Congregants have endured having Doom sprayed in their faces‚ being fed grass‚ snakes and Rattex in a series of bizarre – and harmful - stunts by charismatic pastors over the past few years.

Pastor Paul Sanyangore from Victory World International Ministries Church has gone one better. To rapturous applause he demonstrated‚ on video‚ that he has a telephone number for God.

He was filmed “speaking to God” while pacing up and down during a live church service in March while a female member of the congregation knelt down in church.

“Hello‚ is this heaven?” the pastor asks‚ cupping his mobile phone to his right ear as the congregation look on‚ some in disbelief.

“I have a woman here‚ what do you have to say about her?” the pastor speaks into his phone. “Ahh. Oh‚” he says‚ listening intently. “I should ask her who is Sibo‚” he says aloud.

At one point the pastor asks on the phone‚ “what else papa God” he then relays another message to the congregant who is on her knees‚ with her hands raised.

“God is telling me to ask you why he is showing a heart”. The women‚ almost in tears‚ cannot seem to fathom the “conversation” the pastor is having with God.

“He is saying we should pray for your children‚ two of them … He is saying one is epileptic the other one is asthmatic.”

Yelling in jubilation to his congregants‚ the pastor screams “heaven is online”. He ends off the phone call saying to the woman‚ “Your story has changed”.

The phone call to God had caused so much uproar that the pastor in an interview with Bulawayo 24 said that he would share God’s number soon so that anyone could call him.

Contacting Sanyangore on his own telephone number‚ as advertised on his Facebook page‚ proved to be more difficult than reaching heaven. “The number you have dialled is not in service. Please try again later‚” is all TimesLIVE got after dialling.