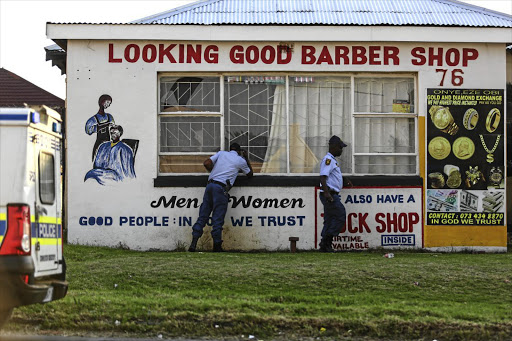 Police look for clues outside the premises where five teenage girls were found. A man and a 17-year-old girl are believed to be responsible. The man was arrested and faces charges of human trafficking.
Image: MOELETSI MABE

A 17-year-old girl has allegedly been used as bait to ensnare younger girls in a human trafficking ring operating out of Springs, on the East Rand.

This is according to the mother of a 14-year-old Mpumalanga girl whom police took from a barber's shop that allegedly doubled as a brothel.

The Looking Good Barber Shop is allegedly run by a 42-year-old man who was arrested in a raid on Friday during which five girls were reportedly found drugged. The girls were aged between 14 and 19.

The 14-year-old had disappeared from her Balfour home on Thursday and was traced by police a day later.

The 17-year-old and the man were both arrested and appeared in the Springs Magistrate's Court yesterday.

They were charged with human trafficking, kidnapping, rape, sexual exploitation and possession of drugs and pornographic material.

The mother, who attended the court appearance, said she was yet to see her daughter.

"The worst thing is that we have been refused permission to see them," the mother said.

"We hear they were found drugged and waiting for clients. It's traumatic. A 14-year-old being forced into prostitution, it's just horrifying."

The case has revealed the prevalence of underage prostitution and human trafficking in the area.

In the public gallery of the court was the mother of the 17-year-old accused.

She said that her daughter was a "problem child" who had repeatedly run away from home since the age of 15.

Social workers had been unable to help the family.

Residents and business owners in Eighth Street, where the alleged brothel operated, were not shocked at the news of the 42-year-old man's arrest.

The shop also operates as a tuck shop and a gold and diamond exchange.

"Every day you see two girls standing outside the place," said one local. "We knew what was going on but it doesn't help if you phone the police - they don't show up."

Other locals said the "brothel" was one of three on the busy street, which is also populated by law firms, mechanics, upholsterers, a day-care centre and an estate agency.

On Monday afternoon the barber's seemed to be deserted.

The curtains were drawn as police officers tried to look through the windows. Earlier, however, several girls were seen entering and leaving the house.

Prostitutes working in the area are not convinced that all the girls the police have taken from the premises were forced into the trade.

"Some girls come of their own free will," said 23-year-old prostitute Palesa.

"There was a time, though, when I helped a 15-year-old girl who claimed she was from Cape Town. She and a friend had been brought here by Nigerians who promised them jobs at a hair salon," Palesa said. "I helped the girl get to a police station and afterwards the pimps were angry with me for quite some time, saying they bring workers here at their own cost."

The Prevention and Combating of Trafficking in Persons Act became law in 2013 and is the state's main weapon.

It provides for a fine of up to R100-million or life in prison.

A report on human trafficking worldwide, released in June by the US State Department, said that South Africa is a source, transit and destination country for men, women and children subjected to forced labour and sex trafficking.