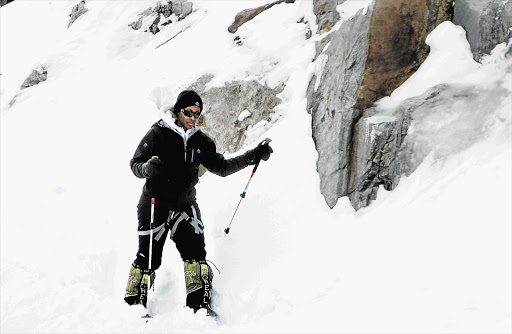 NO MOUNTAIN HIGH ENOUGH: Saray Khumalo training in the French Alps in November last year. She leaves tomorrow to take on Mount Everest

It was third time unlikely for Saray Khumalo‚ who had hoped to plant the South African flag on Mount Everest to become the first black African woman to summit the world's highest mountain.

The Zambian born climber who lives in Johannesburg experienced difficulties when she climbed from the South Col (Camp 4) to the summit‚ her Facebook page said on Thursday. She was helped down the mountain by Asian Trekking.

"She was evacuated per helicopter earlier this morning to the hospital in Kathmandu where she is being treated for health issues due to exposure."

Khumalo ran into difficulty earlier this week because of high winds near the summit and had begun the descent.

The 7 Summits with a Purpose Team said: "It did not happen this time round‚ but the cause to bring the gift of reading to children‚ continues".

She was fundraising for The Mandela Library Projects with the goal of building a library in the Hammanskraal area of Pretoria.

Khumalo had hoped to summit this year‚ her third attempt. In 2014 her climb was abandoned when an avalanche killed 16 sherpa. Her attempt in 2015 was abandoned following a massive earthquake in Nepal.

The climbing season closes at the end of May.