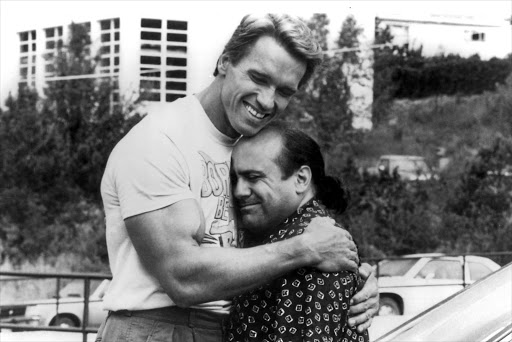 HARD TO TELL THEM APART: Arnold Schwarzenegger and Danny DeVito in a scene from the film 'Twins'.
Image: UNIVERSAL/GETTY IMAGES

I was in Franschhoek last weekend for the literary festival, which is one of the great pleasures but for certain personality types can also be a trial of nerve.

There are always good people at Franschhoek - readers and members of the public, mainly, and old friends and new friends and fellow writers - and also the usual scatterings of enemies and nemeses and billowing blowhards and the barman at the Elephant and Barrel who always serves the pretty girls first even if you've been patiently waiting and it's your turn, damn it.

I met some splendid new people this year, including a swashbuckling fellow fan of the maritime yarns of Patrick O'Brien, and a grand broad named Elizabeth who confessed to me her hitherto secret life of crime, shoplifting James Bond books in the 1970s, and whose brown eyes sparkled as she remembered the thrill of the heist.

I enjoy meeting new people more than almost anything, but Franschhoek is a place where everyone is visible to everyone else, all the time, and there is something about spending three days being visible that makes you start wondering how much of what you do is real and how much is performance, and causes you to start wondering who you are, and if you're doing a good enough job of being yourself, and exactly how obvious it is that you're just busking your way through like a man in a straw hat with a saxophone.

I was taking a solitary breakfast on Saturday, gloomily reflecting on a talk I'd given on Friday evening. I hadn't been satisfied with it. I thought I might have disappointed people, which was bad enough but I had to do it all over again that evening.

It was a talk about taking creative risks and the importance of not being afraid of letting people see who you really are, and I was just poking a doleful fork at an uninspiring breakfast sausage, wondering what in the world had possessed me to do something so stupid, and wondering whether I could find everyone who'd bought a ticket and pre-emptively refund them, when a two-headed shadow fell across my plate.

I looked up in alarm, half anticipating an attack by the Hapsburg Empire, but it was only a couple of grey-haired citizens, apparently without evil intent.

"We saw you talk yesterday," said the elderly gentleman, fixing me with a hawk-like eye.

This is my nightmare: being confronted by people who trusted you and are now regretting it, and here it was happening in broad daylight while I was still waiting for my first cup of coffee. What is it with Franschhoek restaurants? Who serves breakfast before bringing the coffee?

I blinked in disbelief. Was he about to challenge me to a fight? I felt I could take him, but probably not without anyone noticing.

Then his wife slapped his arm and said: "That's not funny." She looked at me and shook her head. "He has a silly sense of humour."

"We enjoyed it very much," said the older gentleman. "To show our appreciation, we were wondering if you would allow us to buy you breakfast."

I must have goggled a little in confusion, like some sort of goldfish in an under-aerated fishbowl, because he hastily added: "Don't worry, we won't join you, we would just like to pick up your cheque. As a way of saying thank you."

And then I still didn't say anything, because I couldn't quite trust my voice not to quaver and break with gratitude. But the mind and the ego are peculiar things: they spring at the slightest provocation to mighty conclusions.

Why yes, I suddenly thought, come to think of it, I was pretty good last night. And upon reflection, that's self-evidently because I am pretty good! I don't know how I could ever have doubted it, but look, it is proven upon the unsolicited testimony of this good man and this good woman, both impartial expert witnesses and unimpeachable judges!

"The only thing we ask," said the old gent, "is that you sign a copy of your book for us."

Sign my book? Well, what could be sweeter? Every author likes signing their book; it means it can't be returned to the bookshop for a full refund.

"I should be delighted," I declared grandly, and he reached into a packet and retrieved Under Nelson Mandela Bridge by Sean Christie.

I scanned both their faces for signs that this was another of his nasty jokes. They beamed back, open and expectant. It was obvious what I should do, but principles are one thing, a free meal is quite another. Sean Christie, if you're out there, I owe you a breakfast.