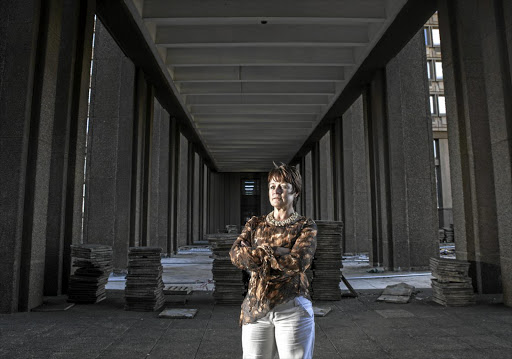 DON'T TAKE ME ON: Petra Smit, trained in karate and Krav Maga, escaped an attempted hijacking by fighting off her attackers until they gave up.
Image: MADELENE CRONJE

When a would-be robber and his friend walked up to a petite woman motorist at a busy intersection‚ pulled out a gun and said “I will shoot you”‚ he surely never dreamed he would be taking multiple punches to the face within seconds.

He had inadvertently picked a fight with 54-year-old Petra Smit‚ a Fourth Dan karate black belt who has represented South Africa at world championship level and who also holds a black belt in Krav Maga‚ a mixed discipline self-defence style that teaches how to put down the biggest bullies – armed or not.

“It all happened in slow motion. My window was open just a crack and he walked up and said something. I thought he was a beggar so I wound my window down further to speak to him‚” the mom from Krugersdorp told The Times on Monday‚ speaking from her office at the Johannesburg Municipality where she works as a deputy director of finance for the corporate services department.

“All he said was ‘I will shoot you’ – he didn’t ask for money or anything‚ and I watched as he took a pistol out of his pocket‚ his friend standing close by him to block it from the view of other motorists‚” she said of the incident‚ which took place on Thursday last week.

Smit reacted by launching an attack through her open window‚ striking the man repeatedly in the face.

“He just walked away. I was about to get out of my car and follow him but decided it was better not to.”

Smit made her way to the office‚ where she found a Johannesburg Metro Police Department officer and returned with him to the scene.

“As we approached the place where it happened‚ we saw the two of them still there. They saw us and then walked away through the bushes. When we checked there‚ we found his pistol‚” she said.

Smit said it was the second time someone had tried to rob her on the same road in Johannesburg. She also reacted the first time‚ grabbing the attacker’s arm and pulling his head down onto the car.

“I just don’t believe in allowing people to do what they want to you. And I am lucky‚ I know how to defend myself.”

Smit dedicates her weeknights to teaching others karate and Krav Maga at the dojo her and husband Deon built in their back yard. She brought back five medals from the JSKA Karate World Championships in Italy in 2014‚ two gold and silvers.

After teaching classes‚ she jumps in front of her computer to apply herself to the research for her PhD in business administration.

While her smile and laugh can light up the room‚ she has a strong determination to overcome challenges.

She shared with The Times that seven years ago‚ doctors told her she would never walk following a horrific bike accident.

She was hit by a security vehicle travelling at speed‚ sending pieces of her Harley Davidson flying 30 metres down the road.

“I broke my left leg in three places‚ my hip and a whole lot of other things‚” she said‚ her smile fading for a brief flash. I left hospital in a wheelchair‚ and went back to karate unable to walk.”

Two years later‚ Smit was up and at them again‚ fighting‚ and living life to the fullest.

“I am a sunshine person‚” she said‚ asked to describe herself. “I love to live and be alive‚ and will help anyone who asks me to.”

Her husband of 18 years said: “She is my best friend‚ my partner and an absolute inspiration in sport and academics.”

Smit is yet to get back on a motorbike.

“It’s the one thing I have been a little afraid of‚” she laughed.