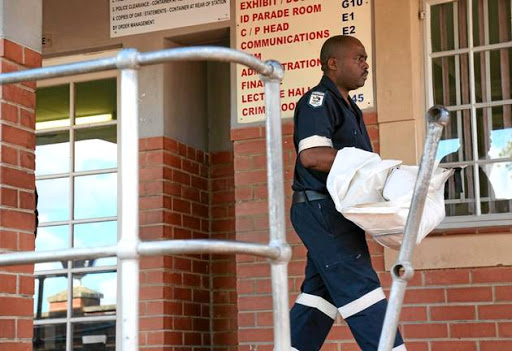 A mortuary attendant carries the body of two-year-old Jayden Khoza who died during protests in the Foreman Road informal settlement
Image: JACKIE CLAUSEN

Moments before tear gas filled his shack in the Foreman Road informal settlement, near Durban, Receive Khoza was playing with his two-week-old son Jayden on a bed.

A tear gas canister had been fired into the settlement as police tried to disperse protesting residents.

Shack dwellers took to the streets at about 5am yesterday, accusing the eThekwini municipality of failing to deliver services.

"I was just playing with him and then the gas came inside. My wife went out to see what was happening but then all the smoke was inside," Khoza said.

He said his infant son was unable to breathe.

"The gas was everywhere and we were running. We called the ambulance but they didn't come.

"Eventually my wife and some women took the baby and ran to the road," Khoza said.

"They found the ambulance, took the baby to them. Then they told me my son was dead," he said.

The child's death spawned another wave of protests.

A crowd marched to the Sydenham police station, carrying the infant's body.

Riot police were deployed to the area to monitor the situation.